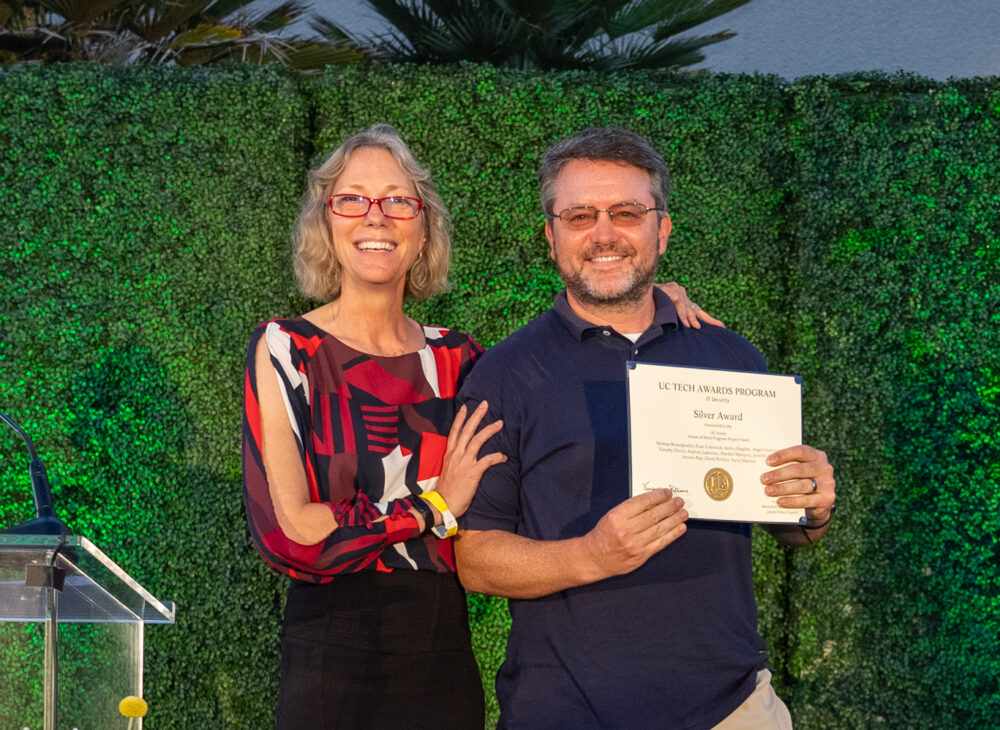 By Sarkis Daglian. A UC Irvine team won the inaugural UC Tech IT Security Award for transforming how the university functions in a hybrid world.

Within 12 months, thanks to a first-of-its kind, centrally funded program, the team succeeded in migrating the campus to mobile work, while enhancing security. The cross-functional group, called The Future of Work team, attributes their success to creative problem solving, skillful project management and being early adopters in the use of powerful, leading-edge technologies.

UC Irvine created the Future of Work Program in Fiscal Year 2021 in response to the changing business needs of the campus earlier that year as a result of Covid. During its one-year timeframe, this campus-wide initiative has changed how UC Irvine functions by enabling mobility and strengthening campus security, both critical requirements of a hybrid world. This entailed deploying new laptops and ensuring these devices included embedded, standardized security. The team deployed the laptops to 1,500 employees across UC Irvine’s main campus and achieved a 15% adoption rate.

The project started with the vision of a mobile workforce, embracing the new hybrid/remote work model. Three goals supported this vision: (1) providing access to all campus departments and schools, including both the administrative and academic units; (2) improving work-life balance for current employees with increased flexibility; and (3) maintaining UC Irvine’s competitive position as a top regional destination for future employees.

To execute on these goals, UC Irvine created a cross functional partnership among four teams: (1) the Office of Information Technology (OIT); (2) the Business Transformation Office; (3) the Division of Finance and Administration; and (4) each of the academic units. This group conceptualized the Future of Work program.

Disruption: Changing the definition of a campus security border

As UC Irvine adopted a hybrid/remote work environment, the campus security border was no longer a physical location as it had been in the past. Instead, the border became wherever UC Irvine does business on a mobile device. The team focused on ensuring the security of these mobile devices. They offered to replace desktop computers in offices with laptops installed with upgraded, campus-wide security software at no cost.

As those familiar with change-management and startups understand, as teams come to understand market conditions when exploring new territory, they often need to make a pivot, or large change, in their approach. This was the case for the Future of Work team.

Initially, the Future of Work program mandated both standardized laptops and software security for both administrative units, who fall under the direct support of the Office of Information Technology, as well as the academic units, who receive IT support from their own, independent IT teams, who are hired directly by them.

The Future of Work team, soon learned that the academic units had different hardware requirements from the administrative units, and therefore could not implement the first iteration of the program, which had mandated one type of hardware solution.

With this important market feedback/insight, the program team made a pivot: they modified their approach and developed a compromise, which they called a “bring your own device” approach. This iteration of the program allowed academic units to receive funding for their computers, even when they purchased devices which were non-standard, provided that these devices included the new security protocol. This gave the academic units the flexibility they required in the type of hardware they used. However, a prerequisite to the release of program funding for the new devices was the installation of a newly created, centralized security bundle that would report into central campus vulnerability monitors. This approach was well-received by all parties, as it both ushered in a new era of centralized security standards, while allowing academic units to remain on their preferred hardware platforms.

About the Centralized Campus Security Bundle

The centralized campus security bundle consists of five components that report into a central console:

These components report back to their respective consoles and provide a high-level, centralized overview of the security status of campus endpoints regardless of who owns or supports them and their location, and is fully trackable.

The team measured program success by the adoption of these resources and utilization of the program funding (the team used 100% of program funding) to meet hybrid work requirements. Other milestones include:

In the year since the program was initiated, Future of Work allowed UC Irvine to achieve its vision of reshaping the workforce to become more mobile, secure and flexible. With central funding, the program ensured that every department could take part in driving the future of work.

In the years to come, UC Irvine is undertaking multiple initiatives to transform how the campus approaches access to university resources, file sharing and endpoint security (security across individuals and their devices). By leveraging multiple cloud solutions, UC Irvine will improve its ability to offer secure, mobile, and flexible solutions as the future of work continues to evolve.

About the UC Tech IT Security Silver Award