A Map for Collaboration 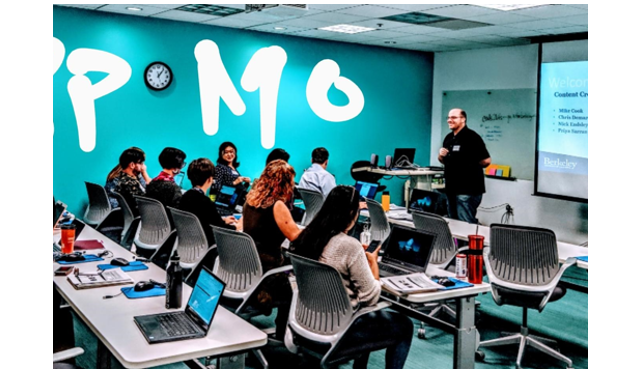 By Yvonne Tevis. This is the story of how three UC employees – from three separate campuses – got what they wanted because they worked together.

What did they want? As process improvement people, they wanted tools. Specifically, a tool that slashes the time spent mapping processes.

Their collaboration began casually over lunch in fall 2019. Sri Ramya Bachu Venkata, a project manager at UC Berkeley, was enthusiastically telling Halina Wojnicz, IT PMO director at UC Office of the President, about a new tool she was testing called Promapp.

Venkata said with Promapp she could map a business process in two hours instead of eight. “I haven’t seen a simpler way to visualize and articulate complicated processes,” she said.

Wow. Wojnicz had to know more. Her team was going to be managing some big systems projects, and she loved the prospect of saving time through streamlined process mapping.

Jeffrey also said UCB was about to renegotiate its contract and was facing a potential price increase.

Coincidentally, at the same time, Lynette Essey, projects director for the UC San Diego Operational Strategic Initiative, reached out to Wojnicz to ask whether Promapp was available at UC.

Sensing opportunity, Wojnicz arranged a call to brainstorm with her Berkeley and San Diego partners. The three quickly agreed to collaborate. From the start they had a larger vision as well – to ensure colleagues at all UC locations could get Promapp too if they wanted it.

Everyone took a role in the collaboration. UCB started canvassing other colleges and universities for price comparisons. Then, well-armed with pricing benchmarks, UCSD took the lead on contract negotiations. UCOP executed the final contract.

The result? An excellent systemwide deal covering unlimited users and an unlimited number of processes. Also, any UC campus can utilize the contract. In fact, the more campuses that come on board, the cheaper the cost for everyone. For each campus, there’s an initial one-time cost for training, and then going forward, an annual license fee to join the pool. Larger campuses pick up slightly greater costs.

Another campus – UC Santa Barbara – has now joined the collective. Katie Mankins, director for special projects in the Office of the CIO, said, “We plan to have our next Lean Six Sigma cohort be able to use this tool when they start their Green Belt training, making it easier for them to do their process walks as well as current and future state process diagrams.”

Maybe other campuses will join too. Sollenberger thinks it’s worth it. “As someone with over a decade of Lean mapping and process documentation experience, I finally have a tool in Promapp that delivers on what every other process mapping tool promised,” he said.

This story is about leadership from the ground up: Three people at three campuses collaborating to get a better deal, and conducting all aspects of the project themselves.

It’s also the story of their focus on the greater good. By making sure their efforts would extend to colleagues across UC, they mapped a process for systemwide collaboration.

If you are interested in getting Promapp at your campus, contact Richard Greene, local procurement manager, UC Office of the President. If you have questions about how Promapp can be used, contact Nick Endsley, sr. business process analyst, UC Berkeley, pictured above leading a Promapp training session.