Advancing Accessible Technologies for All 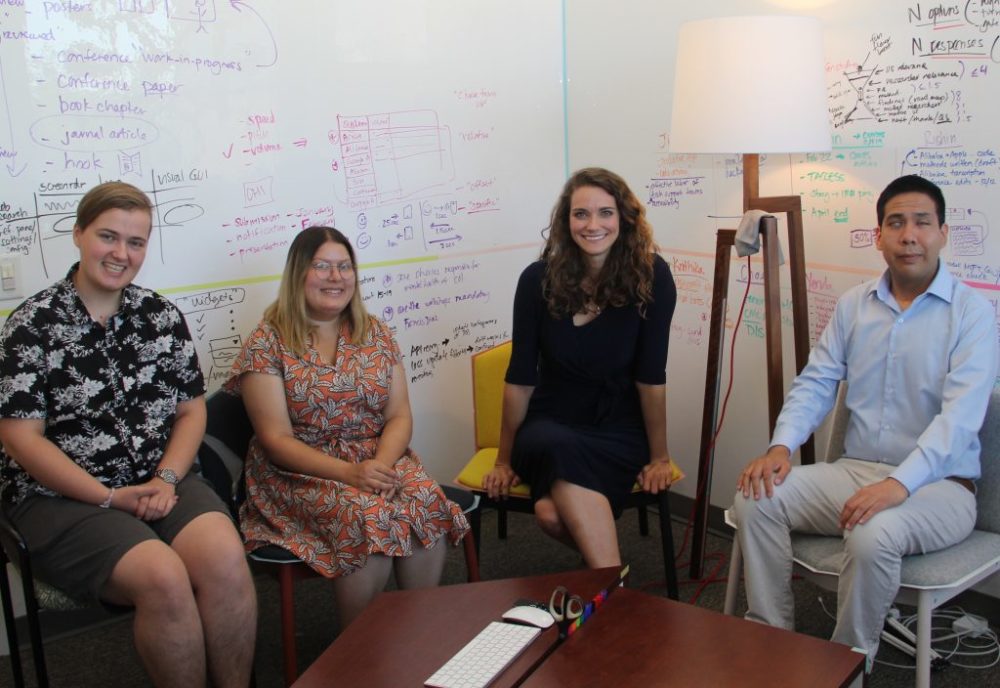 By Shani Murray. Informatics researchers are currently leading two accessible technology projects: one targeting children with neuro-developmental disorders, and the other targeting older adults and people with vision impairments through a partnership with Toyota.

Two current projects led by researchers from the Department of Informatics represent the broad spectrum of accessible technology users, with one project targeting children with neuro-developmental disorders, and the other targeting older adults and people with vision impairments. Gillian Hayes, the Robert A. and Barbara L. Kleist Professor of Informatics and Vice Provost for Graduate Education and Dean of the Graduate Division at UCI, and Franceli Cibrian, a postdoctoral fellow in the Social and Technological Action Research (STAR) lab run by Hayes, are working to design a smartwatch app for improving self-regulation in children with Attention Deficit Hyperactivity Disorder (ADHD). At the same time, Informatics Professor Stacy Branham is leading a team that is developing wayfinding technology for older adults and people with vision impairments.

Yet both projects take a similar approach, involving multidisciplinary teams and multiorganizational partnerships and placing a strong emphasis on community engagement, building on the core values of the Department of Informatics: creativity, engagement, interdisciplinarity and partnership. These values are at the foundation of a design philosophy that prioritizes user needs and involvement and recognizes that innovation stems from inclusivity.

“The CoolCraig project is about designing wearable applications to encourage self-regulation in children with ADHD and other neuro-developmental disorders,” says Cibrian. As outlined in the grant, “research has shown that self-regulation is a robust predictor of positive outcomes in adulthood and that early adolescence is a critical period for promoting self-regulation.”

So the CoolCraig project aims to design a smartwatch that increases behavioral awareness and encourages positive behaviors. The team is working closely with students attending the Children’s School, which provides cognitive-behavioral training for children in kindergarten through eighth grade (learn more about the school in this Eyewitness News story).

“We don’t design things and then test with them,” says Cibrian. “We codesign together.” Hayes notes that “bringing in people who do not normally have a voice in designing new technologies makes the products much better and gives us a better chance at equitable and ethical technology design.”

The team ran design workshops with the children as well as with the teachers, staff and parents. “It’s important to understand the real needs, so I work with all the stakeholders before I start working on the design.” She recently asked students to draw different interfaces for the prototype.

“Using the app will support self-revelation to help them control their emotions, behaviors and thoughts,” says Cibrian. The responsibility of behavior control often falls to the caregiver, who might offer praise and encouragement to keep children on task or refocus their attention when they are distracted or upset. The app could act in place of the caregiver for these particular tasks and might also promote positive behaviors — for example, prompting a student to talk to a friend or get some exercise. The researchers are currently working to identify contextual clues so such notifications won’t cause anxiety or additional distractions, which can be problematic with any user group but especially in children with ADHD.

The goal is to develop an app that can support students as they grow older and encounter new environments. “The children are age 8–13, but after that, they go to high school, so they need to learn how to be more independent,” says Cibrian. “We’d like to have an application that helps them with this transition and acts as the support they need.”

Toward Mobility for All
In the second project, led by Branham, a team of UCI researchers is collaborating with the University of Maryland, Baltimore County (UMBC) through a new partnership with Toyota Motor North America (TMNA). The purpose of this collaboration is to design prototypes that offer navigational support for older adults and individuals with vision impairments. UMBC’s Ravi Kuber is overseeing community engagement activities in Baltimore, while Branham and her team are conducting prototype research and design here at UCI.

Branham’s interest in intersectional disabilities is what helped bring this project to life. When she and other researchers first met with TMNA representatives, the main topic of discussion was older adults. “We realized they were interested in mobility for older adults, and we work with people with disabilities — particularly people who are blind,” explains Branham. “So we said, ‘you know what’s a really important topic right now in our field is the intersection of identities.’”

The reality is that a large portion of people who are blind are also older. The Centers for Disease Control and Prevention estimates that the population of adults with vision impairment and age-related eye diseases will double over the next 30 years. Recognizing the potential to address multiple needs, TMNA has funded a two-year collaboration between UMBC and UCI focused on novel mobility aids for both blind people and older adults as well as for people at the intersection.

“Lots of people are working on mobility technologies for independence,” says Branham, “but this is one of the first efforts to look at intersectional identities within disability.”

The work at UCI involves conducting an interview study of the target communities and designing personas — fictional characters representing potential users. The personas will then inform the design and development of technology prototypes that provide better mobility support for these communities.

Both the personas and resulting design prototypes will be iteratively developed with members of the targeted user communities — an important element of Branham’s design philosophy. So it is not by accident that Hipolito Ruiz, a UCI student majoring in psychology and social behavior, will be responsible for recruiting participants, running the interviews and co-design sessions, and analyzing the data. As a visually impaired student pursuing an entrepreneurship minor, his contributions will be essential to ensuring the work’s practical application in the real world.

“By including students with varying abilities on the team and running focus groups,” says Ruiz, “we can minimize the number of assumptions we make so the end product is actually what people want.” Part of his current efforts include helping to recruit an advisory board of not-for-profit companies that have expertise in the interests of marginalized groups and in navigation and assistive technology design. The board will be a valuable resource in helping the team reach beyond academia, with representatives from organizations such as the National Federation of the Blind (NFB), American Printing House for the Blind (APH) and AARP (formerly the American Association of Retired Persons).

“They will make sure what we do is relevant to the current business practice of developing navigation aids,” says Branham, whose ultimate goal is always the same: develop technologies that are accessible and inclusive. “We need to see how these marginalized groups have interdependent needs and share common goals, so we can ultimately build more universally usable technologies.”

Universally Usable Technologies
Both projects, though aimed at helping those with disabilities, have the potential for use in much broader populations. Similar to how Good Grips kitchen utensils — made for people struggling with hand strength and motor dexterity — are now found in kitchens everywhere, the idea, more broadly known as universal design, is that designing well for people with unique needs creates better products for everyone.

Cibrian explains that the CoolCraig app could also help teens and adults with self-control. “It’s not only for children with ADHD; it could be for anyone who struggles with self-regulation.” Similarly, Ruiz points out that the benefits of the wayfinding technology aren’t limited to people with disabilities. For example, he notes that their navigational device could potentially help people find stores more easily in a crowded shopping mall. “The project will surely help older individuals as well as persons with visual impairments, but the goal is to generate technology that will enhance the lives of everyone.”

This article originally appeared in UCI In The News, October 28, 2019, and is re-posted with permission in the UC IT Blog.