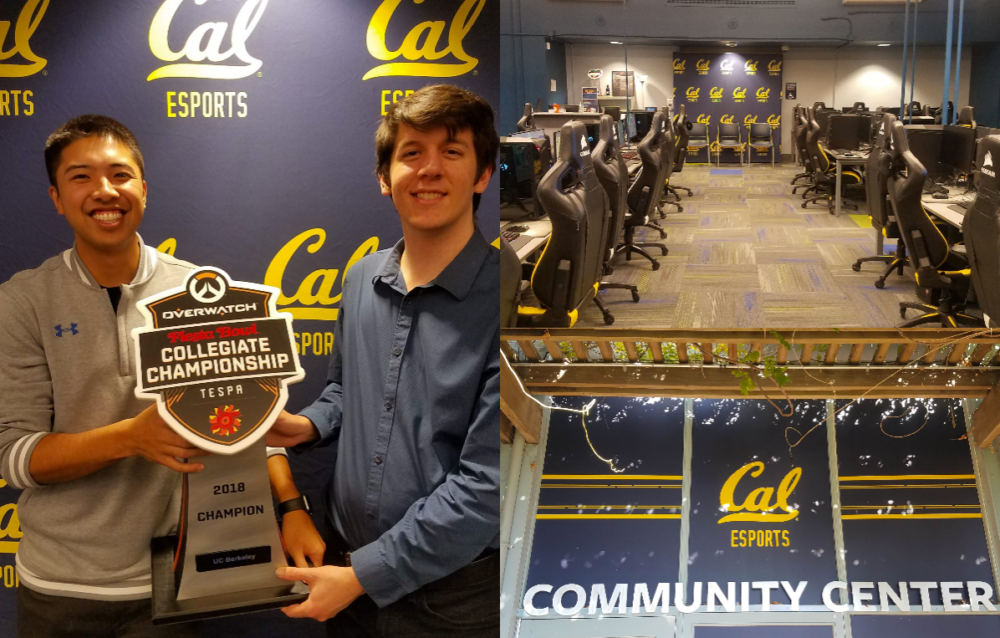 By Jeané Blunt. UC Berkeley opened the Cal Esports Community Center in 2018. I spoke with Kirk Robles, associate director of business development in the Division of Student Affairs, UC Berkeley, to ask about the center’s goals and how they were able to win the ESPN Collegiate Esports Starcraft II Champions in just over a year.

Why did UC Berkeley create the Esports Community Center?

There was a big need on campus. A lot of students were competing and winning championships from their dorms and apartments. Some of them were even winning scholarships.  If we wanted to level the playing field, we knew they’d need a space to practice and compete.

It all started with the idea to create an esports gaming expo at Caltopia. Caltopia is a festival that takes place the two days before school starts at UC Berkeley’s Rec Center.
We contacted NVIDIA, a graphics processing unit (GPU) company, and told them there was a large interest in esports on campus. We told them about our idea for the gaming expo at Caltopia and asked for their help. NVIDIA agreed and provided the computers for an open play area and brought their different partners to have a vendor fair.

They were so impressed with the turnout that they asked to partner with us. So my director, Joe Watz, and I helped craft the vision to build an esports community center, not just an arena. With Berkeley being so space deprived, we didn’t want to just build an arena that takes care of our student athletes. We wanted to create a space that would serve a multitude of people in the community.

What are your hours? Is the Cal Esports Community Center open to the public?

We’ve been open for about a year. Currently the center is only open to students and faculty, Monday through Friday, from 7 am to 11 pm, and weekends from 3 pm to 10 pm. We hope to open it to the public soon. The reason we’ve done a controlled launch is because we have 54 computers in here and 38,000 students. It’s not enough! So we wanted to make sure we were able to manage the rollout of the center, meet demands and normalize things. Our goal is to open another center and to service another location on campus.

How many esports teams does UCB have? What are the most popular games?

We have 23 teams, 15 are varsity and 7 are junior varsity. We call them Division 1 and Division 2. A lot of competitions will only recognize one team from a college, so when that team goes they wear our jerseys and sponsor logos to fully represent Cal Esports.

In these competitions, what teams does UC Berkeley compete against?

In terms of the UCs, UC Irvine is one we typically compete against, also UC San Diego and UC Davis. Outside of California we compete against colleges like Rutgers, NYU, schools from Georgia, and LSU. I think that’s the beauty of it, we’re able to play against different colleges and not necessarily have the requirements and burdens of traveling to a central place.

How do students handle the school/life/gaming balance?

It’s really amazing to see how well our students compete, knowing that they still have student responsibilities. This past year, I flew with the team to Houston for the first-ever ESPN Collegiate National Championship, in which we won the StarCraft II Championship. This was the week before their finals! It was amazing for me to see how these students are able to balance that and still compete at such a high level.

What are the biggest misconceptions about gaming?

Esports is often lumped together as one sport. I think the biggest thing to recognize is that each game within the esports genre is essentially another sport. There are different games like League of Legends and Overwatch. That’s the equivalent of volleyball and basketball. Just because a student plays one, doesn’t mean they’ll play the other.

The stigma with gaming is, you are very isolated. What the center brings is the opportunity for students to come together and play. It’s a different atmosphere when you can turn and say “Wow, did you see that play?!” and see that social interaction. There’s a saying in rec sports, “Wellness happens here.” Wellness is different for everyone. For a lot of these students, playing these games with their friends is a release. No different than you and me playing basketball. That’s why we chose to call it the Cal Esports Community Center, to show that there is a sense of community in gaming.

Some parents feel gaming is a waste of time. How do you respond?

I think their view of gaming is a little skewed based on what they’ve seen in the past. Professional gaming involves many different aspects like accounting, marketing, and research. It’s like traditional sports. There’s not just professional athletes, there’s a whole field behind it. Just because your son or daughter is a gamer doesn’t mean they’re going to become a professional athlete in gaming. They can take that passion and apply it within the gaming industry. I think that’s why it’s important for us to partner with these companies, to show how they’re investing in these students.