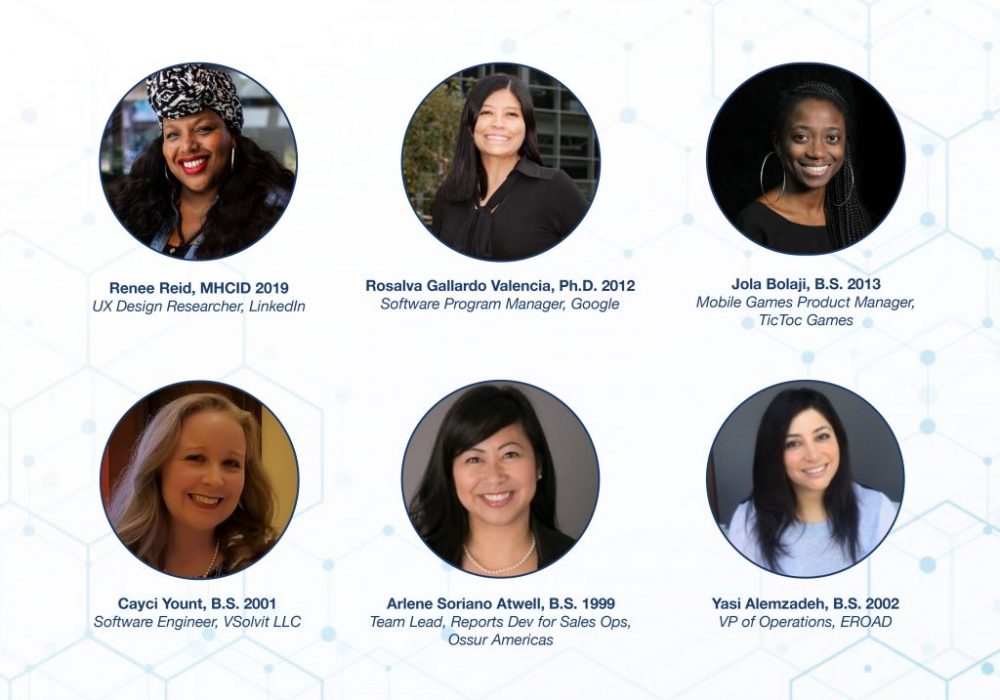 By Shani Murray. To all the aspiring women in STEM out there, know that there is a group of alumni from UCI’s Donald Bren School of Information and Computer Sciences (ICS) who have your back. On March 5, 2021, in recognition of International Women’s Day on March 8, the ICS Alumni Chapter curated a diverse panel of ambitious, trailblazing women from a variety of industries to have a dialogue about inclusivity, respect and gender equality in computer science-related fields. Chapter president Pooja Lohia moderated the online panel, “Her-story: Women Superstars in ICS,” which featured the following six superstars:

This month’s panel, part of the alumni chapter’s “Lunch and Learn” series, was similar in format and theme to February’s panel for Black History Month. Lohia, a lean six sigma business consultant who graduated from UCI with a B.S. in ICS, wanted to create a learning event about diversity, equity and inclusion while fostering a dialogue based on real stories from ICS superstars. After highlighting the various paths to UCI and to careers in the tech industry, the panelists discussed everything from mansplaining, imposter system and microaggressions to the role of authentic allies and how “empowered women empower women.”

The Diversity of Women in Tech
Reid started the discussion, noting that her journey to UCI’s MHCID program involved a lot of “zigzags, twists and turns.” She first earned a degree in marketing and communications from Savannah State University, a Historically Black College and University (HBCU) in Georgia. “I waited 20 years into my career journey to go back for my master’s and, in doing so, I was really laser focused on what I wanted,” she said. The MHCID program worked well for her because she was able to add that “academic rigor” while continuing to work as a design researcher. “This was just a really great way to complement all of the industry information and knowledge that I already had, [adding] this amazing layer to [my] portfolio of skill sets.”

Gallardo Valencia also had a career in tech before coming to UCI, working for five years as a software engineer in Lima, Peru. “It’s [my] journey of making possible the impossible,” she said of leaving everything behind to earn her Ph.D. in the U.S. “I wanted to understand how we could improve the software development process.” Knowing very little English was just one of the many roadblocks she overcame before becoming an engineering manager at Intel and later a software program manager at Google. “It took a lot of endurance and perseverance to achieve this, and [it] has made me the fearless Latina leader that I am.” She has helped others follow in her footsteps by creating the nonprofit PeruSV to “close the technology and innovation gap between Peru and Silicon Valley.” She also established the Rosalva Gallardo Valencia Graduate Award in 2019.

Bolaji started off as a computer science major at UCI, but a course taught by Professor Melissa Mazmanian piqued her interest in human-computer interaction, leading her to graduate with a B.S. in informatics. During a short stint at Disney, she took a position as a product manager, where she “really fell in love with product management and just the day-to-day impact on the game.” Now, she’s a product manager at Tic Toc Games (“not TikTok!” she says), an indie game development studio. And while she owns a PlayStation and plays PC games with her co-workers, she stresses that she was never a huge gamer as a child. “It’s definitely interesting to acknowledge people who are not gamers who work in games,” she says. “I think people get afraid that if they’re not hardcore gamers, they can’t work in games.”

Yount talked about her “unconventional journey” to ICS, noting that she first came to UCI as a drama major. “I thought I was going to be a star on Broadway, and then right before orientation, I came to my senses and realized that I would make a terrible waitress and I needed to pick another major.” She found computer science through a process of elimination. The music lessons she had taken as a child gave her “an aptitude for math,” and computer science was the only “math-science-related thing that I thought I might actually want to do for a career.” She ended up graduating as a double major in ICS and drama. “I use my degree in the arts more than people might realize,” she said. “Speaking up in a meeting isn’t that big a deal once you’ve performed in front of thousands of people.”

Atwell also started off in another major — political science. “I’m a daughter of immigrants, the first one born here and the first one to graduate from an American university, so it was kind of a big deal that I make something of myself.” Yet early on, she found herself struggling and not meeting expectations. Fortunately, an introductory computer science course put her on a different track. “I took ICS 1A and was like, ‘wow, this is where I need to be!’” Today, she’s in the biomechanical device industry and has worked for 13 years at a company that makes prosthetic feet and knees as well as orthopedic products. Her position in the sales operations department is “constantly evolving, and that’s probably why I’ve stayed there for so long,” she said, adding that “it also helps that my boss is female so she’s very supportive and understanding.”

Like Atwell, Alemzadeh came to UCI as a political science major. “I thought I was going to go to law school, but I was bored out of my mind,” she admitted, and while computer science wasn’t an easy transition for her, “it was challenging and it was hard, but it was really rewarding.” Furthermore, the fact that people assumed she was a social science major, as if she couldn’t possibly be interested in computer science or engineering, served as further motivation. “I was going to push myself, and I was damn sure going to be great at it in some way, shape or form!” That attitude stuck with her as she entered a male-dominated industry, and now she is vice president of operations for a telematics company that deals with trucking companies and the technology within the vehicles.

Empowering Women
One of the questions Lohia asked the panelists was how they overcome everyday subtle sexism or racism and how they combat common misconceptions.

“Having worked in male-dominated fields my entire career, I’ve been mansplained a ton,” said Alemzadeh. “The way that I approached it was very much like, ‘they’re just ignorant, they have no clue, and I’m going to do what I’m going to do, because I know that I’m the expert here.”

Yount admitted that sometimes it’s hard not to feel inferior when in a room full of “technical” guys who “live and breathe some programming language or tech,” but then she said she just reminds herself that “they have to Google that error message just as much as I do… they’re looking up stack overflow,” she said. “It’s not all women asking and men answering; that’s not how it actually works in the real world.”

“One of the reasons why I work at the company I work at now is because we are kind of a unicorn where you see [a] diversity of gender, diversity of race, [and people from] all walks of life,” said Bolaji. “One of my favorite things about my current job is my [white, male] boss is very much, I like to say, an accomplice, rather than an ally.” She contrasted this with a supervisor at a previous company who was a woman. “It ended up that she wasn’t really supporting me and was kind of actually working against me,” she lamented. “I think it’s really important that… we make this space for people and really advocate for people.”

Alemzadeh agreed and talked about a mentorship program for women in ICS she started while at UCI, and how she’s currently a mentor for women she met through a local women in tech group. “There’s always been this battle between women in the workplace [and] I think one of the things that you see changing is women backing up women,” she said. “It’s super important to pay it forward and [guide] some of these young women who are out there and struggling to find their space.”

Gallardo Valencia noted that seeing other women call out microaggressions in the workplace helps build awareness. “When, in some of those meetings, I saw other women saying… ‘that’s not appropriate,’ it helped me to learn to identify those moments.” She now does the same in meetings and then follows up privately with the person so they understand how their actions were received — regardless of the intention. “It helps to have those conversations and be willing to openly answer the questions that they have.” She also emphasized that “we need to be mindful to create a space for those marginalized voices.”

“Bringing that awareness is just so important, so that the next person may not have to deal with it,” said Reid. She also explained that when approaching someone about a microaggression, she has found it productive to use the phrase, “I just want you to understand how this showed up for me.” She then seconded the point about women backing up women, noting how the mantra “empowered women empower women” has transformed a lot of people’s way of thinking. “If you are able to hold that space, you are empowered — so empower other women.”

Webinar attendee Adriana Meza Soria also asked about how to help allies get more involved. (It is worth noting that Meza Soria was the first recipient of the Rosalva Gallardo Valencia Graduate Award.)

Lohia encouraged people to connect with others as mentors or mentees — through their companies or various organizations (see a list here) or through UCI’s Anteater Network. “There’s a variety of different ways to get involved.”

This article originally appeared in UCI In The News, March 25, 2021, and is re-posted with permission in the UC IT Blog.