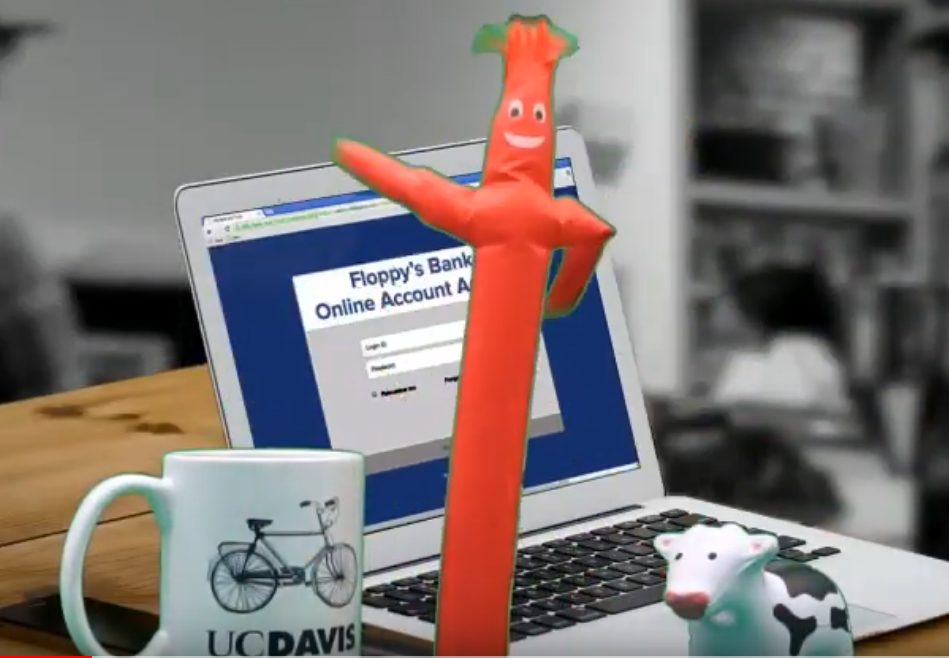 By Bill Buchanan. Meet Floppy and Cow, a couple of characters at UC Davis. One has an uncanny ability to misuse technology, sometimes in spectacular fashion. The other understands how tech works.

Together, they debuted this past fall in five short video comedies of woe and redemption that illustrate basic tech skills and/or good tech habits. Information and Educational Technology at UC Davis first posted them on its Facebook, Twitter, and YouTube accounts during Cybersecurity Awareness Month in October 2019.

One video underscores the value of backing up your data. Another rebuts Floppy’s misplaced confidence that nothing could go wrong when he uses public Wi-Fi in a coffee shop to access his loan account.

Mark Deamer, IET graphic designer/illustrator, and I created the videos last summer to promote information security, the IT Express Service Desk, the UC Davis IT Knowledge Base – or some mix of these services and messages – to students.

The real Floppy is a desktop-sized, battery-powered version of the inflatable, flapping, arm-waving spectacle you might see at a tire store, and Cow is a stress-relief squeeze toy. The toys have been a periodic campus giveaway – if you work at UC Davis, you might find one in a nearby desk or drawer.

“That’s how we found Cow,” Deamer said. “We already had Floppy, which I had bought because it was so fun and ridiculous. But we needed a friend who could keep Floppy from haplessly destroying the Internet. We wandered around the office, saw Cow on a cubicle desktop, and thought, ‘This should work.’”

The videos look cheap and thrown together, by design. We hope the technique amplifies the humor, but we also wanted to work quickly at no cost. We used tools and software we already had. Mark put considerable thought into the direction, details and pacing, drawing on his visual and design expertise and background in theater (he has won regional awards for stage design).

The UC Davis Information Security Office (ISO) used the videos in its Cybersecurity Awareness Month campaign. Student Affairs Marketing and Communications (SAMC), and other colleagues and friends at UC Davis, helped share the videos to audiences beyond what IET would reach on its own. SAMC has also teamed with the ISO to promote other information security messages in 2018-19.

Responses to the videos have been very positive, although the reach is not yet what we want. We had reached about 3,000 people by the end of October, and 7,100 by Dec. 26. Word of mouth continues to help, and there’s more engagement ahead. SAMC’s reposts to its UC Davis Life Facebook page have been particularly helpful. There’s talk of using the videos when new students come to campus for orientation this summer. The videos’ messages are evergreen, so nothing is lost if more students don’t discover them until this spring or later this year.

These videos are a new information security tactic for us, and we’re learning from the experience. Several people have asked us to create more of them. If the impact keeps growing, we might.

Deamer provided the photography, visual direction, and the editing, recording, and production. I wrote the scripts. We developed the ideas and videos together, and each of us contributed a voice: I’m Cow, Deamer is Floppy.

We hope people enjoy the videos, and take the messages to heart. We’re confident that Floppy will.

Bill Buchanan is a senior writer and editor for Information and Educational Technology, UC Davis.