Being part of every research discovery at the university – in conversation with James Seddon, UC San Diego 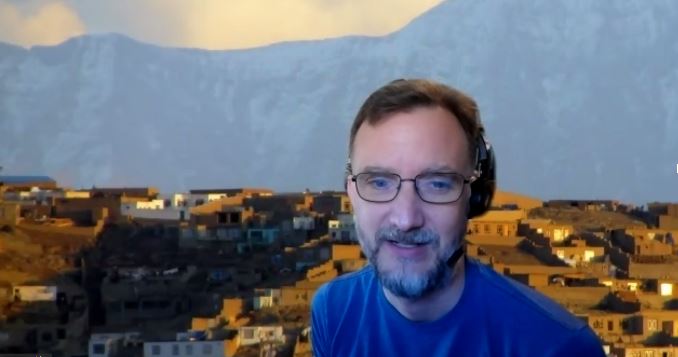 UC IT BloggerJanuary 4, 2023All Articles

Thank you, James Seddon, Senior Director, Enterprise Network and Voice Services, IT Services, UC San Diego for joining the UC IT blog editors for a fantastic conversation via Zoom about what inspires you in your work and how your background in the military and in industry helped shape this. Learning how you chose to work at UC, based on: (1) your interest in innovations in IT; (2) opportunities for career growth; and (3) working for a mission-based organization; along with how you think about your work today, provides important lessons for others in technology and higher education. Notably, the discussion about how you handle pressure, manage a highly trained team, and how the military trains its leaders provides a perspective that can inform others advancing in their careers. It is notable that, what you thought would be three years when you joined from a semiconductor firm, quickly became a 17-year career at the university. The Zoom background, depicting Afghanistan, speaks to the causes you support, and we appreciate the important updates you provide on LinkedIn and look forward to continuing the conversation.

Transcript, edited for clarity and based on the recorded interview with James.

Being a part of every research discovery

The teams I’m leading get a little piece of every great accomplishment that the university achieves because the university’s people are using the tools that my teams have built, maintained and fixed when they break. And so, every research discovery was made using systems my teams deploy. We get a little piece of everything that way. I find it rewarding.

All the services are [highly technical] these days, but the navy is, in particular, a very technical service. There’s lots of gear and computers and all kinds of technology everywhere. Where I got the experience there that was applicable to IT was in managing teams of technical people. This is what you do when you are a leader in the Navy. That’s been true at the university too. You’re also managing teams who know far more about their tech than you do. This is another feature of being an IT manager: as you advance, you’re no longer doing the work directly. In the teams that work below you as a leader, they know way more about that technology than you do. But you still need to be able to communicate with them and help them solve problems. The Navy prepared me for that by putting me in charge of teams of technical people who knew their business way better than I – especially in the beginning, where, in the Navy, they had been there much longer than me. The skill of a good leader lies in being able to navigate that situation, and utilize their expertise and build it – build teams around it and respect their expertise and what they bring to the table, and then identify what you can do to maximize those results, and remove barriers.

Serving the greater cause

The idea of service is something that runs between my military service and my job at the university. I view them both as serving. I talked earlier about how I really liked the mission of the university. You feel like you’re serving a greater cause – you’re on the good side of things; you’re fighting for the good teams in both situations.

True leadership – how to inspire, motivate and value people

The military is extremely focused on developing its people. And that’s something that I learned in the military that’s served me well. And my job at the university is focused on people. People tend to think – people who have no military experience –  tend to think that the military is a place where officers bark orders, and then the enlisted folks run around and execute as fast as they can. But in reality, the military spends a lot of time teaching both those who are enlisted and officers about leadership and true leadership and how to inspire and motivate people, and value people, because that’s the way you get the best results.

High-pressure: the double-edged sword in IT

The double-edged sword in IT is running services, like my teams do for Wi Fi, for example. There’s a lot of pressure because – especially these days – WiFi is not some optional, nice-to-have thing. The business of the university stops without WiFi. Many students are still attending classes remotely from their dorm rooms, so, if the WiFi doesn’t work, they can’t go to class, they can’t take tests, they can’t do the research, they can’t turn in assignments…It is a big deal if the Wi Fi doesn’t work and so, on the rare occasions that something goes wrong and breaks, those aren’t particularly fun days, and you feel a lot of that pressure because, in other areas of networking, other than WiFi, there are situations where months of experimental data would be at risk if the network doesn’t get fixed within some period of time. That creates a lot of pressure. And, when things are going wrong, it’s not particularly fun. ….that’s the one side of the IT sword. That is why I say pressure comes along with it. Because you’re running services that people depend on, to do their job and to do important things. And so that’s why the pressure is built in.

However, that pressure is there because what you’re doing matters. This can create a huge amount of job satisfaction, if you remember to remember that. It is highly rewarding to work on something that matters a lot. And, when I walk around campus – and I was on campus a few days ago, it was heartwarming to look around and see all of the students using the services that my teams build and maintain and design and fix. And it’s like we’re a part of all of that activity. We walk past a student lounge, and there’s our student groups. You see a group of students sitting around a table with their laptops open and working on something. And I know they’re using the Wi Fi that my team provides, and we’re completely invisible to them. And that’s probably the way we like it, right? They have no idea what it takes to make that happen. But there, and thanks to our teams, these students are studying and collaborating, and learning and growing up.

The rewards of being in a role that matters

On the other side of that sword is that when things go wrong, there’s a lot of pressure. And it’s like the phrase, “Well, that’s life in the big leagues,” when you are in it. If you want to work on services that matter, then there’s going to be the pressure to deliver, because they matter. But the alternative would be to work on things that don’t matter. And, it’s not as appealing to me and I don’t think it’s as appealing to a lot of the folks on my teams to work on things that don’t matter to work on something that nobody notices if it works or not –  it’s far less rewarding. It’s much more rewarding to be working on something that people depend on to do their jobs and to do the work they have to do. So the pressure comes with the job if you’re working on important things.

James Seddon works in Information Technology Services at UC San Diego as the Enterprise Network Operations Manager. He’s also an aspiring writer, retired sailor, husband, father, and regularly unsuccessful fisherman living in suburban San Diego. He’s been with UC San Diego since 2005 and worked in IT in the industry prior to that. In the Navy, he served 21 years as a surface warfare officer in active and reserve billets, afloat and ashore, with multiple deployments throughout Asia and the Middle East, and retired in 2015.