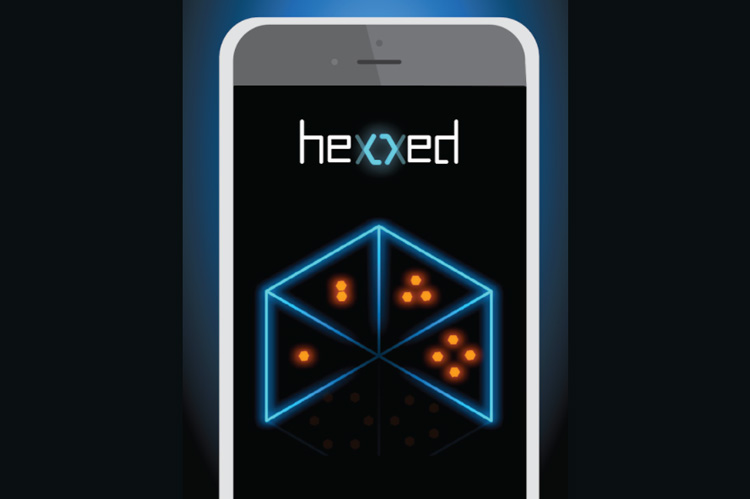 By Robert Sanders. Fans of Candy Crush Saga, Flow Free or Minesweeper should check out a challenging new mobile game app, hexxed, that will stretch your brain as it helps brain researchers understand human strategic thinking and perhaps improve the reasoning of artificial intelligence.

The puzzle game was released this month through Apple’s App Store and Google Play by neuroscientist Gautam Agarwal and colleagues at the University of California, Berkeley, and the Champalimaud Centre for the Unknown in Lisbon, Portugal.

Those who download hexxed will confront a game more challenging than most phone-based games, which can be played mindlessly while killing time or watching TV. Those playing hexxed must learn how to succeed with almost no instructions — they have to figure out the rules on the fly.

“I really wanted to avoid biasing the player as much as possible, so in a sense, it is at odds with one of the basic principles of game design: Use storylines to orient the player,” Agarwal said.

By providing no narrative about the rules or goals, Agarwal’s team sought to make the human experience of the game resemble the way artificial intelligence (AI) might approach it, which is blindly, looking only for patterns that maximize the number of points won. That way, he said, he can more directly compare human strategies to those used by state-of-the-art neural networks at the heart of today’s AI, and perhaps provide a benchmark for how AI measures up to the more flexible intelligence of humans.

The app is also rare in crowdsourcing gamers to contribute to basic research on how humans think. Other crowdsourced studies, in particular, those available through Amazon Mechanical Turk, also provide large data sets that can be used to study cognition.

“You have people engaging in behavioral experiments in the form of games all the time, but it is not a medium that scientists seem particularly wise to,” said Agarwal. “This game is a form of citizen science that can help us model behavior in a more immersive environment than we typically construct in the lab.”

The hexxed app stores each move that the player makes, reporting the data back to the team for analysis. If enough players ascend to the highest level and master the game — Agarwal hopes for at least 1,000 expert-level players get hexed by the game — he will acquire a unique dataset that scientists can mine for answers to myriad scientific questions regarding intelligent problem-solving.

“Initially, we are focused on those leaps of insight that suddenly allow a player to solve entire classes of related problems,” Agarwal said. ”Hopefully, if we have a good enough model, we can then go through this data in a more fine-grained way and start getting at the more nuanced differences in individual experience: cultural differences, age differences, personality differences. There are people who tend more towards anxiety or planning or rumination or persistence. Do they approach the game differently?”

The Sweet Spot of Game Complexity

Scientists interested in human reasoning have, to date, used one of two approaches, Agarwal said. The first is to use simple, lab-based tasks. While these are easy to model, they are a far cry from the level of complexity found in real-world problems. At the other end, researchers have used existing games such as chess, Go and Tetris. But all of these are complicated strategic games — some, like chess, with idiosyncratic rules — that are hard to model because there is essentially an unlimited number of possible arrangements of the gameboard.

“The issue with games like chess or Tetris is that you can’t map the space of possible experiences — they’re virtually infinite,” said Agarwal, who obtained his Ph.D. in neuroscience from UC Berkeley in 2009, working with Ehud Isacoff, director of the Helen Wills Neuroscience Institute. “The hexxed app, unlike most neuroscientific tasks, requires participants to choose from a large, yet well-defined, space of actions. What is more, you grapple with essentially each of the 164 possible puzzles by the time you beat it. Each person attempts every puzzle, forming a much more comprehensive map relating the space of puzzles to the space of actions.”

Agarwal and colleagues tested a prototype of the game last year on a dozen subjects while he was a post-doctoral fellow at the Champalimaud Centre for the Unknown and found that people resorted to the same common strategies, including suboptimal ones. As they progressed to levels that demanded new solutions, subjects persistently employed outdated strategies that weren’t up to the challenge.

He subsequently compared human game performance to that of several neural networks that have been used to master Go and Atari games.

“The AIs succeeded, but took much longer,” Agarwal said. “At Level 1, people took on the order of two attempts to beat it. AIs took on the order of 20 attempts. By the time the AIs get to Level 5, they were closer to humans. But if you look at how humans and AI are solving individual puzzles, by the end of the game, humans are collecting half of the puzzles perfectly, but the AI almost never gets any puzzles perfectly. It seems to use these cobbled together solutions that are good enough, but never really get to the crux of the problem presented – it’s doing something stupid.”

“When you are in a new situation, and you have to piece together seemingly unrelated past experiences to come up with something new — that is closer to the frontier, as far as AI is concerned,” he said. “This is the problem of generalization. How do you apply familiar strategies to unfamiliar problems, and when should you give these up and try something totally different?” Agarwal with his wife, Daria Kaufman, and child. Kaufman, a contemporary dancer and choreographer, is interested in the question of why we move and speak the way we do and how the body conveys meaning. (Photo by Tor Stensola)

He suspects that individuals will cluster around a small number of different approaches to solving the game, jumping from one approach to another as they confront increasing degrees of complexity in the game.

“Any one of us has only a local vantage point from which we view a problem, until we ditch it for another local vantage point, another theory,” he said. “By looking at thousands of humans, we can have a bird’s eye view of how humans as a population approach the same problem in ways that no one person is able to see for themselves. This game is a way of systematically inducing people to make a series of discoveries, so that we may model them in a mathematical fashion.”

He’s already seen that players — he now has about 40 dedicated testers — create stories about which strategy works, many of which are wrong. His mother even reached the last level with a faulty narrative of what would allow her to succeed.

“The data we have collected so far show how central stories turn out to be, even though this was not something we started out expecting to be the case,” Agarwal said. “Whether we like it or not, it is the reality of how people approach complex problems.”

He sees intriguing parallels with the complex decisions involved in voting, which requires balancing many sometimes contradictory pieces of evidence, forming narratives to simplify the process, but which inevitably entails oversimplification and making a momentary decision that can have long-range consequences.

“I would consider this project a mathematical attempt to explain how people use stories to make sense of the world,” he added.

Agarwal’s colleagues are Tiago Quendera, at the Champalimaud Centre for the Unknown, who helped develop the game; Mattia Bergomi, at Veos Digital, who designed, developed and tested AIs on the game; Zachary Mainen, who supervised the project; and Mani Hamidi, a visiting scholar at UC Berkeley from Canada, who is helping to analyze the behavioral data.

The project is supported by the BIAL Foundation, which funds basic research in the area of psychophysiology and is affiliated with the Portuguese pharmaceutical firm BIAL.

This article originally appeared in Berkeley News, December 14, 2020, and is re-posted with permission in the UC IT Blog.