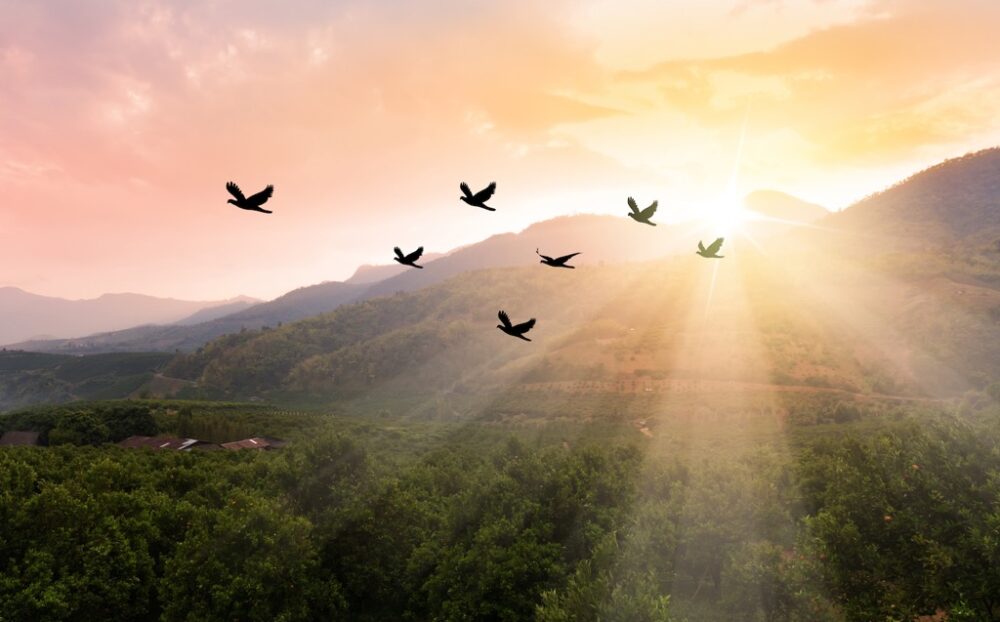 By Emily Cerf & Allison Arteaga Soergel. Luca de Alfaro, professor of Computer Science and Engineering, has always harbored a hidden love for biology. During the pandemic, this passion far outside his professional area of study evolved as he became an avid bird watcher, even using spectral analysis to identify how many distinct baby bird chirps could be distinguished from a nest in his garden.

So, when de Alfaro learned in the fall of 2021 that there was a new faculty member, Assistant Professor of Environmental Studies Natalia Ocampo-Peñuela, coming to UC Santa Cruz who studied birds, he reached out to offer his help if her research ever needed a computer science component. As it turned out, her aim to create large-scale maps of bird habitats was in need of computer science expertise.

Since their initial connection, the two researchers have begun a new collaboration to use machine learning models to create continent-wide maps of bird habitat connectivity for conservation purposes, and they have recently received a $60,000 Google Research Scholar award to fund this work.

Ocampo-Peñuela is a conservation ecologist who studies how habitat quality and availability affects extinction risk among the roughly 4,000 species of birds in South America. She had always dreamed of developing large-scale maps of habitat connectivity that would show how birds can move across these landscapes and where connections between habitats could be restored for many species simultaneously. But she had run into a roadblock with available modeling methods.

“The problem is scale,” she said. “When you want to model habitat connectivity for many species at once, or do it at a continental or national scale, then the current models are not able to handle the data computationally. They just kind of break.”

But, recent advances in machine learning technology have made it possible to process large amounts of data at once. By taking advantage of the computational power of graphical processing units and expressing algorithms in a way that allows for many images to be compared pixel-by-pixel in a parallelized fashion, de Alfaro believes that the team can create mathematical models faithful to bird movement behavior, and do so much faster than previous methods have allowed.

“Imagine mapping continents at the scale of 10 meters, and then you’re figuring out how these habitats are connected one to another at that same scale,” de Alfaro explained. “Computer science has evolved some of the tools to precisely process these very large amounts of data in parallel. And this has been chiefly in machine learning, image processing, and image recognition specification.”

With help from these methods, the team will first analyze map and satellite data, including from Google Earth imagery, to take a close look at habitat quality factors like land cover, elevation, and human land use at much finer resolutions than have previously been possible. Then, they’ll compare this with data on the mobility of South America’s bird species to get a sense for the distribution of available habitats and which of those are functionally connected.

The resulting product will be a new open-source habitat connectivity algorithm that will power a decision-support tool for conservationists. The team plans to create an interactive map of South America that will flag priority conservation areas—where existing habitats that are essential to many bird species can be protected—and priority restoration areas, where bringing back connections between habitats could benefit the most bird species.

To test the algorithm and interactive mapping tools, the team will first apply them on a smaller scale to develop habitat connectivity models for birds in California and within Colombia, where the researchers are already familiar enough with the terrain and species to be able to verify the modeling results. Then, they can work to expand their models to continent-wide scale.

So far, the development process has been a great example of interdisciplinary collaboration, with ecological theory informing which machine learning techniques are applied. And UCSC students are an integral part of this work. Baskin School of Engineering undergraduate computer science students Natalie Valett, Artie Nazarov, Coen Adler, and Jasmine Tai are currently working side-by-side with the two faculty to build out the code to process satellite imagery and run the computation. And, along the way, the students have learned a lot about conservation and how their studies can be applied for real-world impact.

“We would probably move nowhere without Natalia’s insight, because she is the one that keeps us in check, in terms of whether our results have significance in terms of actual bird movement,” Nazarov said. “It’s just really awesome how we went from an idea that we need to implement to producing actual, meaningful data in terms of bird movement. It’s exciting to see how it will be applied in the real world.”

Ocampo-Peñuela says that the improved data these models could potentially produce would go a long way toward advancing conservation. The limitations of current habitat connectivity models have meant that conservation management decisions about which habitats to protect or restore may be based on data that are limited to a smaller number of species. A more integrated approach, with more comprehensive data, could identify areas previous models may have missed that are critical to a wider range of biological diversity.

Applying these new techniques to bird conservation is a great place to start, Ocampo-Peñuela says, and ultimately, those efforts are likely to help many other species too.

“Birds are really good indicators of ecosystem health, because they’re very sensitive to changes in the ecosystem,” she said. “So if you study birds, and if you conserve birds, you’re probably conserving a lot of other species that live with them.”

The models that the team develops may one day be able to integrate many additional types of species too, which Ocampo-Peñuela says could benefit the entire field of conservation. De Alfaro also hopes that this work can further a larger pursuit of applying advances in machine learning for the benefit of the natural world. And he’s excited that this project, still in its early iterative stage, will allow for further interdisciplinary work to help make that vision a reality.

“It’s not entirely common when you talk with people of different fields that there is both a willingness to collaborate and a project that is available for joint work,” de Alfaro said. “This is one of the beautiful coincidences that make work in a university such as UCSC so much fun.”

This article originally appeared in UC Santa Cruz Newscenter, April 28, 2022, and is re-posted with permission in the UC IT Blog.