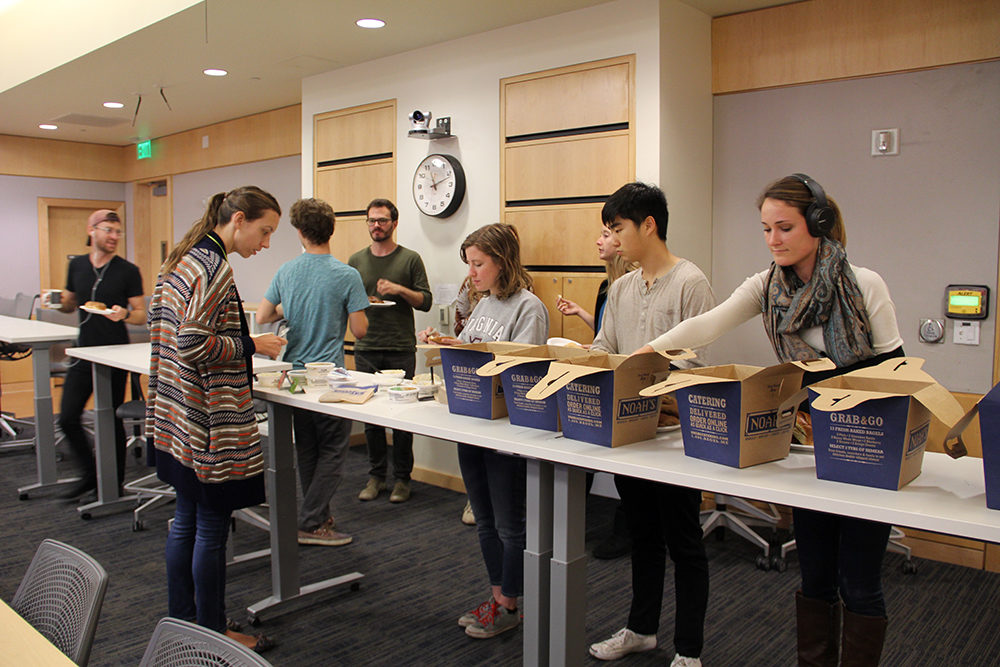 By Jeannine Cuevas. According to the UC Office of the President, over 40% of students UC wide sometimes don’t get enough to eat because they simply cannot afford to buy food.  At the same time, an estimated 40% of food in the U.S. goes to waste, squandering the substantial energy and water resources it takes to produce and transport our food as well.

In 2016, Elizabeth Watkins, Graduate Division dean and vice chancellor of Student Academic Affairs (SAA), came up with a practical and innovative idea to help address both issues — food insecurity among students and food waste on UCSF campuses.  She enlisted staff in SAA’s Student Information Systems unit to create an alert system, which would tell students when food is left over after catered events on our campus. About a year later, the Food 4 UCSF Students app was born.

The app was first tested — successfully — at the Parnassus campus in July. Confident that the app was working well, SAA officially launched it and added food providers at Mission Bay in September. If there is enough interest at other UCSF locations, the program may expand further in the future.

Now, rather than throwing food away or leaving it to spoil in a hallway, staff can easily invite students to take advantage of a free meal.

Students who sign up for the app receive alerts via text message when there is free food available. Then, they drop by and pick up the food — no charge.

Cee Cee Shinn, Parnassus Conference Center manager, and her team were the first to utilize the new app to offer food to students.  “My staff and I feel so good about participating in this great program!  The students’ genuine smiles and ‘thank yous’ really make our day,” said Shinn.

The Food Security for Students program is supported by a campus allocation from UC President Janet Napolitano. As a participant in the University of California Global Food Initiative, UCSF established the FSFS Program to develop and implement services and resources that would alleviate student food insecurity. Questions about FSFS efforts and the Food 4 UCSF Students app may be addressed to fsfs@ucsf.edu.