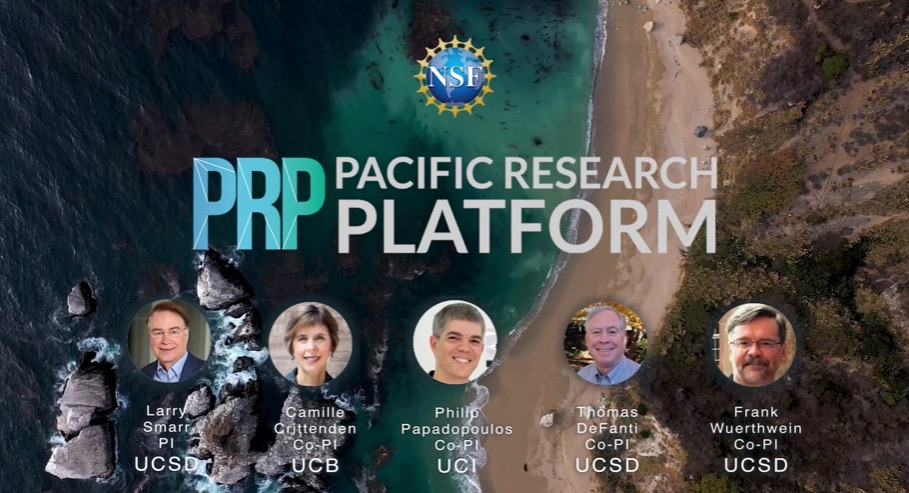 No one predicted the dramatic and sudden shift in the world of work that happened in March of 2020 when COVID shut down offices and the U.S. experienced the mass exodus to a Work-from-Home economy. For many, that shift was a reckoning with inadequate internet capacity for work, school, health care, and entertainment needs and desires.

For the scientists and researchers linked to the Pacific Research Platform, supported by CENIC and its own Nautilus infrastructure, the conduct of science was already at the desk and important discovery and knowledge continued uninterrupted.

“We may not have had toilet paper,” said networking pioneer Tom DeFanti. “But computational science continued with no problem.”

The Pacific Research Platform (PRP) was originally conceived in 2014 by member institutions of CENIC, the Corporation for Education Network Initiatives in California, as a way to support data-intensive research projects. The challenge was to connect multiple researchers located in multiple locations who require rapid access to dispersed datasets. It has become a significant force in developing an entirely new model of cyber-infrastructure ecology.

“The challenge was to connect multiple researchers located in multiple locations who require rapid access to dispersed datasets. It has become a significant force in developing an entirely new model of cyber-infrastructure ecology.”

The co-PIs plus their innovative networking engineer colleagues led by John Graham of UCSD’s Calit2/Qualcomm Institute, along with Dima Mishin and Tom Hutton of the San Diego Supercomputer Center, learned that when scientists exploring complex topics involving layers of data and information connected with the geometric power of what Smarr calls “a high-performance data freeway system using optical lightpaths to connect data generators and users of that data”, the potential for scientific discovery and innovation fuels change that can improve our world.

Take, for example, the challenge of predicting, rather than reacting to the persistent spread of wildfires in specific regions of California. Based on PRP capacity and engineering ingenuity, researchers and scientists have developed WIFIRE, a critical decision-support tool for those first responders seeking to predict the behavior of those increasingly prevalent wildfires.

With an array of sensors throughout the state that can detect wildfires, scientists at UCSD have layered the information from multiple real-time data sources to enable scientists to model and predict fire behavior. That breakthrough can then provide second to second information in the field to those on the frontlines of working to minimize fire impact.

“We can bring together all the data sources to enable fast decision support using models, data science, and fire science,” said Ilkay Altintas, director of the W Lab at UCSD. “That’s what we have achieved.”

At a capstone conference in mid-2021 for this first phase of the PRP, presenters noted that one of the most powerful outcomes of this work has been within the human networks of scientists and networking engineers. Scientists presented their disciplinary challenges, driving the collaborative networking community to devise elegant solutions as the somewhat invisible innovators of the PRP. It has proven to be an outstanding ecosystem of innovation with impact.

The goals for the future are to extend the innovative power of the network to more institutions nationwide with an important focus on empowering and engaging those communities who have historically had less interaction with research and education networking platforms.

“The goals for the future are to extend the innovative power of the network to more institutions nationwide with an important focus on empowering and engaging those communities who have historically had less interaction with research and education networking platforms.”

“We intend to promote STEM education for those individuals and communities who have been isolated from the breakthroughs in data science,” said Louis Fox, President and CEO of CENIC. “As a nation, we can’t afford to lose the innovative insights of our diverse communities by having any community lost simply by a lack of access to our cyberinfrastructure. Every community college, minority-serving institution, and all colleges and universities must be connected, engaged, and empowered by access to our national high-performance digital fabric that will unleash our knowledge-based competitive edge into the future. Indeed, this reinvigorated investment will be vital for the leadership of our nation, including driving the development of state-of-the-art cyberinfrastructure through deeper and broader engagements among and with the scientific community.”

As the Pacific Research Platform expands to more universities and institutions nationally and globally, we plan to share a range of applied impacts enabled by this distributed computing network.

This article originally appeared in CENIC, December 2, 2021, and is re-posted with permission in the UC IT Blog. The original article contains a video link.