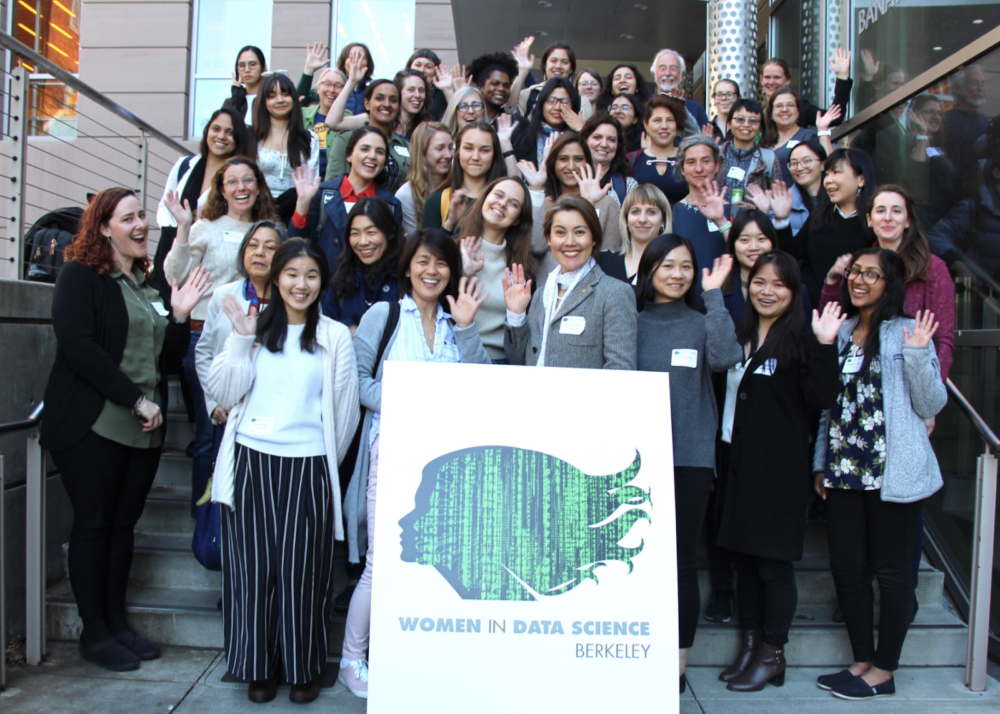 By Cindy Chen and Amy Neeser. The Women in Data Science (WiDS) Berkeley Conference took place on March 2, 2020, and was sponsored by Research IT, the Berkeley iSchool, CITRIS & the Banatao Institute, and the Division of Data Science, Computing, and Society. WiDS Berkeley is a satellite event associated with the Women in Data Science conference at Stanford. This was the third year that UC Berkeley hosted a WiDS event and it featured a mixture of live Berkeley events – including a keynote, tech talks, a panel, lunch, and reception – and streaming content from the Stanford conference. This sold-out conference featured speakers from across the UC Berkeley campus, Lawrence Berkeley National Lab, Joint Genome Institute, Stanford University, and industry. Data scientists, students, and professionals in adjacent fields from around the globe gathered to discuss the latest research and applications of data science in a broad set of domains including biotech, machine learning, artificial intelligence, and big data.

Jenn Stringer, the Deputy CIO and Assistant Vice-Chancellor of UC Berkeley, kicked off the WiDS Berkeley conference by speaking about some of the challenges she faces in working to increase diversity in IT and the emergence of data science as an opportunity to build diversity into the foundation of this field rather than as an afterthought. Persis Drell, Provost at Stanford University gave the opening address and introduced keynote speaker Daphne Koller, CEO and Founder of Insitro, both of which were live-streamed from Stanford. She provided a new approach to drug development that uses machine learning techniques and high-quality data to design safe and novel therapies that can help more people with a lower cost 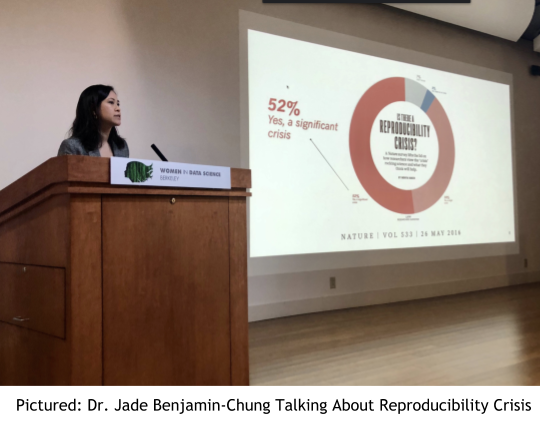 During the Tech Talks, Dr. Dani Ushizima, Dr. Kjiersten Fagnan, Dr. Jade Benjamin-Chung, and Dr. Deb Agarwal showcased their work at UC Berkeley women working  in data science. Data Scientist at the Berkeley Institute for Data Science, discussed machine learning and the metrology of materials. She uses artificial intelligence tools and images analysis on ceramic matrix composite to build incredibly resistant aircraft turbines for aviation, carbon textiles as rocket protection material from NASA for Mars 2020, and Roman concrete as a long-lasting construction material. Dr. Kjiersten Fegnan, Chief Informatics Officer at Joint Genome Institute, talked about hacking bacteria to drive the health of our environment and bodies as well as image processing technique as a solution to scientific dataset resource and classification methods. Dr. Jade Benjamin-Chung, Epidemiologist and Lecturer at UC Berkeley Division of Epidemiology & Biostatistics, described how giving free flu vaccines to elementary students and community demonstrates how epidemiology and biostatistics can be used to collect minimally biased data in difference-in-difference analysis with open science frameworks. Dr. Deb Agarwal, the Senior Scientist at Lawrence Berkeley National Lab, discussed her AmeriFlux Carbon Flux project that explains the carbon exchange with the atmosphere in different biomes and NGEE tropics project that reveals the uncertainty of CO2 in the climate model. 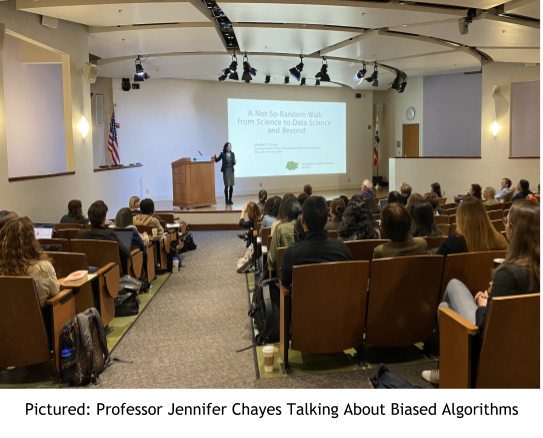 Professor Jennifer Chayes, the new Associate Provost for the UC Berkeley Division of Computing, Data Science, ​and Society and Dean of School of Information, presented her keynote and shared her personal experience of building an interdisciplinary group at Princeton University. She applied research skills from her background in physics to algorithms on random networks and computer science theory. She worked with multiple well-known research labs on economics, anthropology, sociology, and biomedicine fields, introducing “FATE” (Fairness, Accountability, Transparency, and Ethics) as a term to explain a new field. 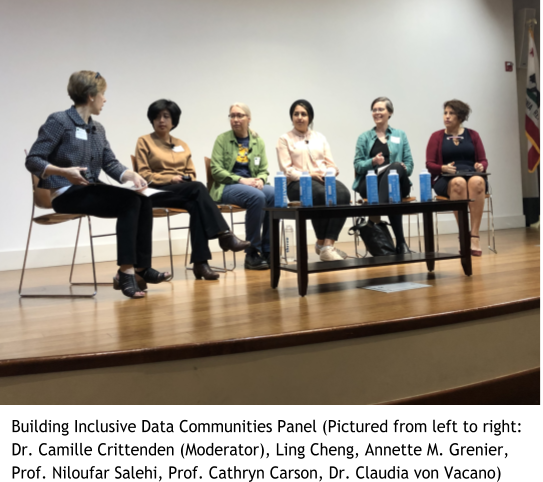 During the afternoon, Professor Tsu-Jae King Liu, Dean of UC Berkeley College of Engineering addressed the question of “Why a World with AI Needs More EQ” as a live-streamed speaker from Stanford. The WiDS Berkeley event next hosted a panel discussion on the topic of how to build inclusive data communities. It featured Prof. Cathryn Carson, Associate Dean for Strategy and Planning, Division of Computing, Data Science, and Society at UC Berkeley, Ling Cheng, Data Science Manager at Quizlet, Annette M. Greiner, Web Application Developer at Lawrence Berkeley National Lab, Prof. Niloufar Salehi, Assistant Professor at Berkeley School of Information, Dr. Claudia von Vacano, Executive Director, D-Lab and the Digital Humanities at UC Berkeley, and was moderated by Dr. Camille Crittenden, Executive Director at CITRIS and the Banatao Institute. They addressed issues of women not being included in data collection and standards with examples from their work and research. With the idea of creating a context of belonging and attracting more people into the field, they suggest following the FAIR Principles to make data accessible, findable, interoperable, and reusable. The data itself should be the main factor that makes the data community more inclusive, and therefore we should refuse to accept data that are too complex or too technical to be understood by the people whose lives are implicated by them.

Research IT was delighted to help plan and sponsor this event to advance research through IT innovation. View the full recording of the workshop on the WiDS Berkeley event page.

This article originally appeared in Research IT at UC Berkeley, April 5, 2020, and is re-posted with permission in the UC IT Blog.

Amy Neeser is consulting and outreach lead, Research IT , University of California Berkeley.