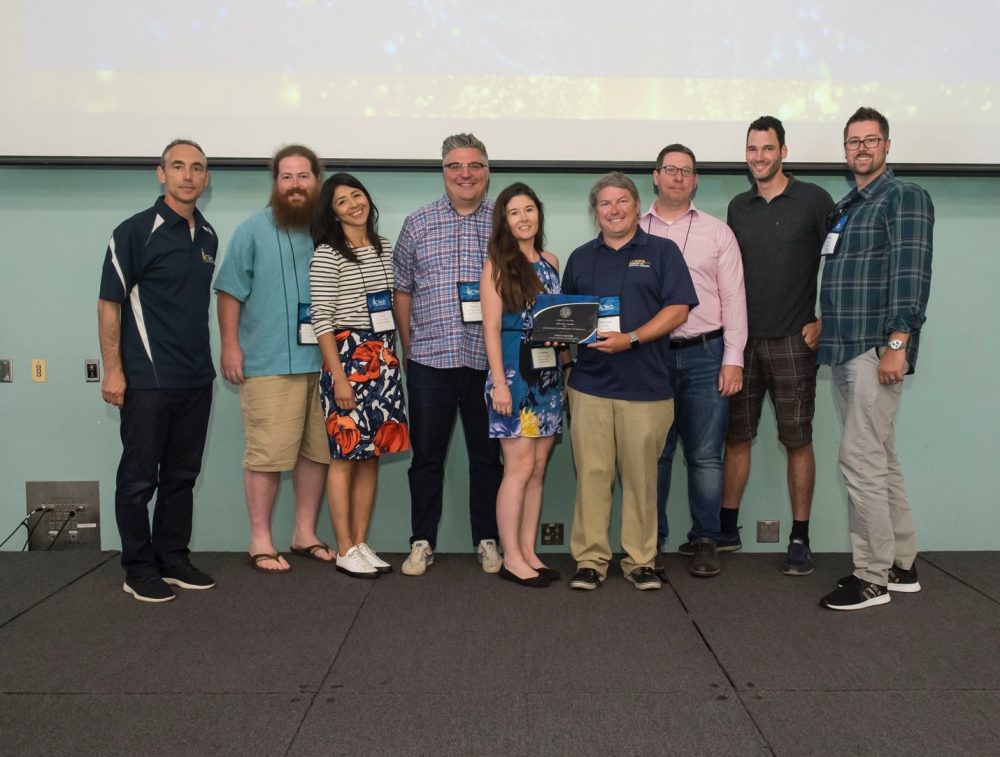 By Val Trullinger. Awards tend to be given at the end of major projects—if you’re lucky. Your team spends months, if not years, of blood, sweat, and tears; and sends their product out to the world, hoping it does well.

The most positive outcome for many software projects? Your users don’t hate it, it’s stable, and now you can move on to other things. If your users actually like your product, it might get some recognition or award you can hang on your team’s wall to look back on fondly.

For SiteFarm, the award came early.

The idea for SiteFarm began in May 2015. At DrupalCon, the Drupal community’s annual North American conference, web developers from UCLA, UC Davis, and UCSF met to discuss how they could establish a UC Drupal collaboration group.

Those conversations resulted in SiteFarm, a collaboration through which UC development teams from several campuses both developed a community of practice, and implemented a shared Drupal web publishing platform. Participating campuses have achieved cost savings and benefited from standardized practices.

Shawn DeArmond, a web architect at UC Davis and one of SiteFarm’s founders, said, “Through this collaboration we brought the ideals of the Drupal Open Source Community to the UC system and, as a result, the web publishing landscape of each campus is more effective, attractive, and secure than ever.”

SiteFarm was designed to solve the lack of commonality among the web installations and practices across the UC campuses. Security models varied (Shibboleth vs. CAS), integrations and features were inconsistent, and there was minimal use of shared techniques and code across the system. Because of this, redundant development occurred and mistakes were repeated across UC.

The UC Drupal Collaboration Group developed a plan to create a Drupal 8 distribution for an easily-shared campuswide web platform, called SiteFarm Seed. The goals were to save UC time and money, standardize programming and communications practices, build a talent pool with common skills, implement a standard set of best practices, create a more secure environment for web hosting, and provide a collaboration model that others could follow.

After that initial meeting, UC Davis took the lead on SiteFarm development. By spring 2017, after two years of collaboration with UCLA and UCSF, UC Davis launched SiteFarm as the campuswide content management system. That fall, the SiteFarm codebase was released to the public under an open-source license.

Off to the Races

Use of SiteFarm took off. By Spring 2018, UCSF had launched about 40 websites on SiteFarm, including the Department of Medicine, alumni, and medical education sites. In November 2018, UC Davis and UCLA released front-end development tools for branding and visual design. By December 2018, UC Santa Barbara launched the site for the UCTech 2019 annual UC IT staff conference, benefiting from shared code from SiteFarm and the UC Davis conference the year before.

The community of practice continued to grow, with common development practices, vendor management practices, and training materials developed and shared among all UC partners. Mayra Solano, a web product manager from UCLA Health IT, said, “Being able to collaborate with and learn from peers across the UC is truly remarkable. We share ideas, experiences, and solutions to help bring secure, sustainable, modern, and beautiful products to our community. I’m also grateful for the friendships we’ve made along the way and can’t wait to gather in person again!”

At the UCTech 2019 conference, SiteFarm was recognized for innovation and collaboration, and won a silver Sautter award. That’s usually when a project would be retired; instead, SiteFarm continued to expand.

In fall 2019, UC Davis and UCLA began collaborating on a UCLA-specific version called SiteDen, to distinguish it from its parent, SiteFarm Seed. At UCLA, IT Services and UCLA Health IT both worked with the UC Davis team to create two variants of SiteDen for their respective organizations’ needs. UCLA Health IT launched its first and proof-of-concept site in early 2020, benefitting from all the shared knowledge and resources, and recently launched the UCLA School of Nursing website. UCLA IT Services began migrating its 40+ existing Drupal 7 sites into SiteDen that fall. It achieved a dramatic increase in the efficiency of website migration and deployment, with 35 sites migrated in 2.5 months. (By contrast, a previous platform migration of 24 sites from Plone to Drupal required 30 months!)

The SiteFarm Seed distribution isn’t the only benefit of the project. What makes SiteFarm special is that it sparked a community of practice of Drupal leaders across the UC system. The community has grown from the initial three campuses to include colleagues from UC Santa Cruz, UC Santa Barbara, and UC Riverside. The community meets monthly to discuss various campuses’ website initiatives, share knowledge and best practices, and learn from each other.

Kristen Lineberger, design strategist and product manager from UCLA Health IT, said, “The advantages to this collaboration are invaluable to our digital ecosystem. There really was no question that learning from, and growing with, our sister UCs was the way forward. I can’t say enough about this community that we have. Every single person is kind, mission-obsessed, brilliant, and resourceful. Can’t wait for DrupalCon 2022!”

At UC San Francisco, SiteFarm is the innovation platform for the campus with dozens of websites in production on SiteFarm, including the Department of Medicine, which represents roughly one-quarter of campus research funding.

The partnership grows, with UC Berkeley now participating and other UC campuses showing interest as well.