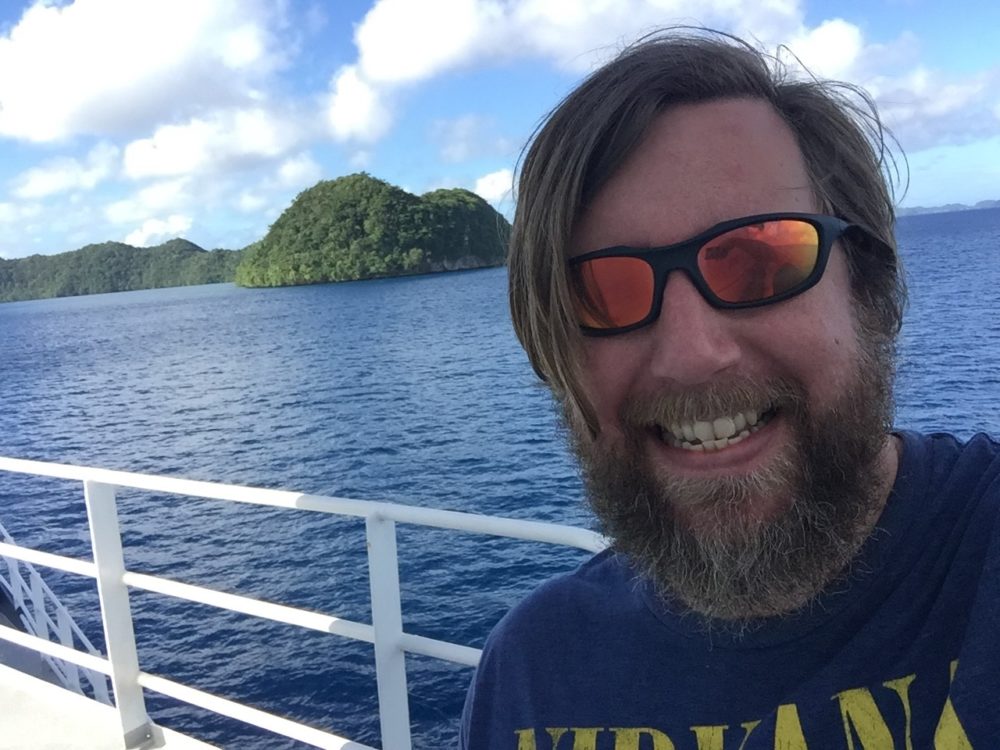 By Alison Spencer. Jon C. Meyer’s job has taken him to Palau, Thailand, India, and Australia, among other places.  “Pretty much anywhere with a coast, I’ve gotten a chance to go,” said Meyer. He travels around the world to transport research vessels wherever they need to be for their next scientific mission. When he’s not voyaging, Meyer’s home base is the Scripps Institution of Oceanography at UC San Diego. Meyer works as an information systems manager for shipboard technical support. He maintains the technology aboard Scripps’ four research vessels and moves them from place to place when needed.

Meyer was introduced to Scripps in 2005, at a rare moment when all four ships were in port. He got a tour of the institution and was struck by its uniqueness. Meyer started working for Scripps in 2006 and has been there ever since. “Our department breaks the mold in terms of UC setup,” said Meyer. “There are policies just for our department because it’s such weird work.” Right now, Scripps is working with state and UC leaders to plan the next research vessel purchase because ships only have a 40-45 year life span.

Scripps is a member of UNOLS, the University-National Oceanographic Laboratory System. “UNOLS exists to make research vessels more accessible to research communities,” said Meyer. The organization consists of 58 academic institutions, some of which have their own vessels though others do not. For institutions without their own vessels, UNOLS normalizes access to the fleet. “Every institution has their own flavor, their own research specialty, that they bring to UNOLS,” said Meyer. “The Scripps approach to supporting oceanographic research is very broad.” Scripps vessels can support research activities as diverse as studying physical oceanography, tagging whales, and surveying the ocean floor.

Every year, the National Science Foundation decides what research missions to support. The foundation allocates time on UNOLS vessels based on institutional needs and efficiency. For example, if a ship will end one voyage in Australia, the NSF will schedule a mission starting from near Australia to follow. “They fill the needs of the scientific community by keeping the ships efficiently organized,” said Meyer. Practically, this means that larger vessels operate around 300 days a year, with brief periods set aside for maintenance.

With ships expensive to operate and space at a premium, it’s not always feasible to have computational staff on board. So when a ship is briefly back in port, Meyer and his staff rush to check all of the vessel’s information systems. Recently, the R/V Roger Revelle pulled into port for the first time in four years. Technicians quickly began crawling around the ship to make sure its systems were still in good shape.

Scripps’ shipboard technical support staff must also be well-versed in computer networking. While researchers conduct investigations in the middle of the ocean, they need to get online to compare data with others and send information back to Scripps’ Nimitz Marine Facility. “Generally the ships do a good job with the computing environment, but every once in a while we have to deal with rust,” said Meyer. The HISeasNet project is dedicated to providing quality Internet access, in spite of complications the ocean environment presents.

In addition to network troubleshooting, support staff also maintain technology unique to oceanography. “There’s a whole other facet with specialized scientific information systems,” Meyer said. Some staff receive training in firing sonars, collecting ocean current data, and mapping the ocean floor. Technology placed on ship masts automatically collects information on precipitation, wind speed, solar radiation, and humidity. The data gets saved in a national archive and is used by Google in their products. “A few months after a mission’s completion, we might see better Google Maps images for where we’ve been, especially in remote parts of the world,” said Meyer. He enjoys seeing his work help humanity gain a better understanding of science and the world around us.

Alison Spencer is a UC Berkeley student majoring in Economics and working as a communications intern in Information Technology Services at the UC Office of the President.