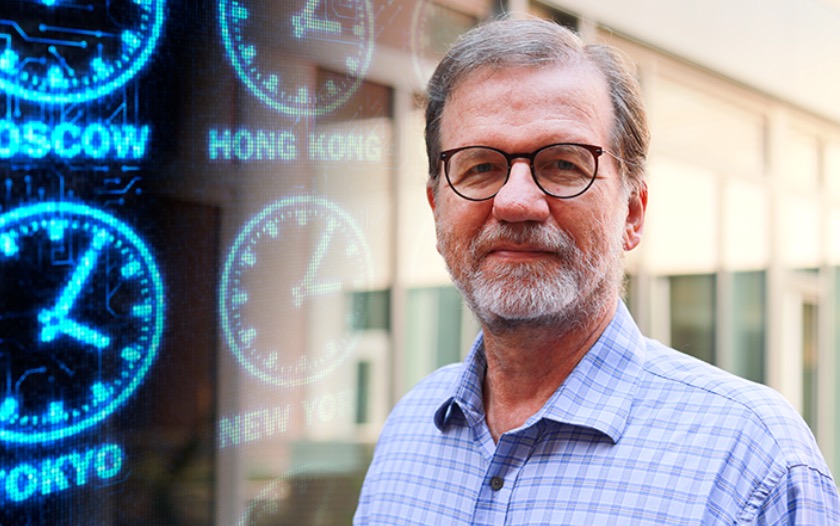 This article originally appeared on the UCLA Samueli School of Engineering web site.

Paul Eggert may not be the most famous person from Russell, Kansas. That distinction, he says, goes to former U.S. senators Bob Dole or Arlen Specter. But this Midwestern native sure has his finger on the pulse of the most valuable commodity in the world: time.

If you’ve ever looked at the clock on a computer, smartphone, smartwatch or practically any other digital screen — and the time has been correct — you owe Eggert, a senior lecturer of computer science at the UCLA Samueli School of Engineering, a debt of gratitude. Working quietly in his spare time, Eggert helps manage everyone else’s time across the globe’s 24 plus time zones.

Dubbed “The Time Zone King” by Medium’s tech site OneZero, Eggert never thought he’d be caught in the spotlight doing something he views as a hobby.

“I didn’t do this to become famous, and I don’t think I’m famous now,” Eggert said — sounding bemused by all the fuss. “It’s just a hobby. My brother does genealogy, so I know my ancestors back to the 13th century, and my hobby is time zones.”

Eggert is currently the editor and coordinator of the Time Zone Database at the Internet Assigned Numbers Authority (IANA), which is one of the internet’s oldest operational institutions. The IANA dates back to the 1970s as an unofficial body before getting funding from the U.S. Defense Advanced Research Projects Agency and coining its name in 1988.

The importance of the Time Zone Database extends beyond keeping everyone on time for Zoom meetings across the globe. Hundreds of millions of people use Eggert’s code every day regardless of whether it is daylight-saving time or if they are flying between time zones. It also enables timestamps on official documents and photos showing when they were created and modified.

What makes the thankless task for Eggert and a small team of IANA “zone keepers” even more complicated is geopolitics. That’s when governments sometimes decide to change their time zones unilaterally with just a few days’ notice. Time becomes currency for these governments looking to flex their political muscles and alter the time without properly alerting the rest of the world.

For Eggert, who undertakes this work without pay and in between teaching computer science classes at UCLA, the complexities necessitate staying up to date via an IANA-managed mailing list and figuring out when to change the database so order can be maintained.

“Last October, it was Palestine and a couple of weeks before that it was Fiji,” Eggert said. “The bread and butter of the work and the most important part of the work is just keeping track of what governments do with their clocks.”

And this, Eggert said, is the biggest challenge when it comes to managing the database. The codebase itself is no problem, he said, but the interests of various parties can muddy the waters and make the work unexpectedly contentious.

Though he now plays an important role in upkeeping the online world, Eggert didn’t set out on a career in computer science with the intention of pursuing such an ambitious undertaking.

“I wrote a Blackjack simulator,” Eggert said. “I was 16 years old, and I was dreaming of going to Vegas and making a killing because I’d have this computer strategy and everyone else was still doing stuff by hand. Needless to say, none of that ever happened.”

Eggert joined the faculty at UC Santa Barbara as an assistant professor from 1980 to 1983 before embarking on a two-decade career in industry, jumping between his own startups and larger companies. It was at his second startup Twin Sun, Inc., that he first encountered the time zone database in 1991.

“There were a bunch of network computers in the Far East, and I had to get their clocks right,” Eggert said. “And so I discovered this nascent time zone database, maintained by Arthur David Olson at the National Institutes of Health.”

Olson’s database only covered a small portion of the world’s time zones, and as Eggert began inputting those for the Far East, he figured he would fill in the rest while he was at it.

“It’s like coin collecting or stamp collecting,” Eggert said. “You want to have all the U.S. dollars ever minted, and if you collected some of them, you’d want them all. It was sort of that attitude.”

But maintaining the time zone databases isn’t just about knowing what time it is right now. Many programs and software rely on historical data to run properly, and collecting time zone history from all corners of the world is no easy feat. Luckily, there was another group of individuals who had been profiting from doing just that for centuries: astrologers.

Before he would eventually join the regular faculty at UCLA in 2002, Eggert headed to the university libraries and pored over old books containing data collected by fortunetellers and psychics who used the information to create astrological charts. He combed through the tables of information that documented locations and the times they observed, going all the way back to 1883 when the standard time in the U.S was introduced.

Unfortunately, accuracy was not the primary concern of many of the astrologers who compiled this information. For them, time was a business.

“The astrologers were focused on the rich parts of the world where people had money to cast horoscopes,” Eggert said. “I’ve been pretty firm about how I want to get rid of the biased, bogus data, but I’ve agreed to do it more gradually to give people time to adjust their old software.”

Looking into the database’s future, Eggert cautioned that it will require a coordinated effort to maintain the legitimacy and consistency of time zone recordkeeping.

Sara Hubbard contributed to this story.