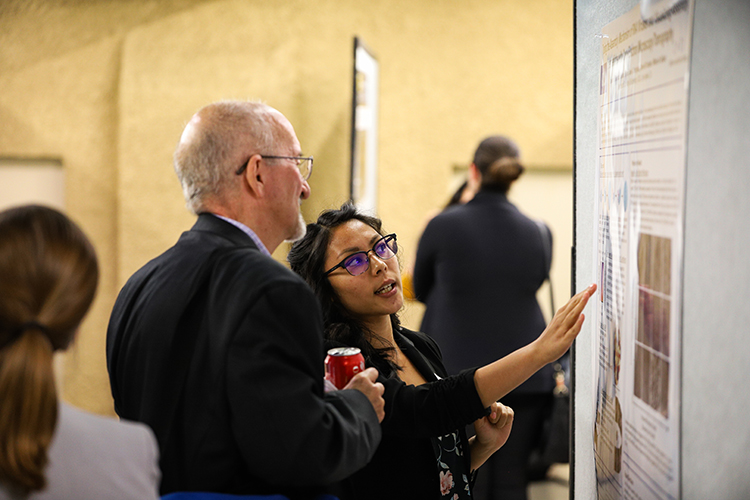 By Gretchen Kell. If underrepresented groups make up 30% of the increasingly diverse U.S. population, why do they represent less than 5% of the faculty nationwide, less than 6% of postdoctoral scholars and only about 10% of Ph.D. students in key STEM fields — mathematical, physical and environmental sciences, and engineering?

The UC Berkeley-led California Alliance knows some of the reasons why, and the successful model program it has built with partners Stanford University, UCLA and Caltech during the past six years to help transform these ranks is now going national, with a $2.3 million grant from the National Science Foundation (NSF) and its Alliances for Graduate Education and the Professoriate program. “There are structural problems in our research institutions that are limiting scientists of color and their careers, and top universities have a responsibility to solve them,” said Colette Patt, director of the alliance and assistant dean of Berkeley’s Mathematical and Physical Sciences Division. “We’re confronting systemic practices that don’t advance equity, and we’re generating practices that do.”

Today, the alliance has become the Research University Alliance — a new, nine-university partnership, again led by Berkeley, that includes the California Alliance’s former members, plus the University of Michigan, Harvard University, Georgia Tech, University of Texas at Austin and University of Washington. The consortium also will co-create partnerships with Historically Black Colleges and Universities and with Minority Serving Institutions.

Together, the new, cross-institutional community is dedicated to stopping the large number of scholars from underrepresented groups stepping off the ladder to the professoriate — currently, for example, “there is a disproportionate reduction in the percentage of URMs (underrepresented minorities)” between the Ph.D. and postdoc levels, said Berkeley psychology professor Rodolfo Mendoza-Denton, co-principal investigator for the Research University Alliance — and to employing and advocating for uniform interventions that position promising URM scientists for competitive research and teaching careers. “Ultimately, we want to ensure that URM scholars who are eligible and competitive for postdoc positions at top-tier institutions, at top-tier research universities, in these fields, are able to get in front of principal investigators and research groups in a timely way for serious consideration for these highly competitive, highly enviable jobs,” said Mendoza-Denton, who also is the Richard and Rhoda Goldman Distinguished Professor in the Division of Social Sciences at Berkeley.

Previous research by the California Alliance found that a career in academia isn’t as desirable if scholars from underrepresented groups don’t see their gender, race and ethnicity represented in the ranks to which they aspire, if their institutional culture isn’t welcoming and if there are no clear guidelines and standards for performance.

Among the nine schools, said Patt, an estimated 850 Ph.D. candidates and 107 postdocs from underrepresented groups in the targeted STEM fields already have been identified as eligible for the new program.

Each institution is being tapped for a unique contribution to changing the status quo. Alliance offerings for Ph.D. students and postdocs will include:

Berkeley News is examining racial justice in
America in a new series of stories.

At the College of Chemistry, Berkeley professor John Hartwig, who in the past has hired two postdoc scholars from the California Alliance to work in his lab, said the absence of postdocs and faculty members from underrepresented groups at top-tier research institutions “certainly is noticeable.”

“I’ve been a faculty member for 28 years, and faculty meetings at Berkeley now look much like the ones I attended at the beginning of my career,” said Hartwig, who holds the Henry Rapoport Chair in Organic Chemistry. “There may be more Asian Americans and a few more women, but not underrepresented minorities. Sadly, this composition looks normal for academics, but it’s not what’s normal in the general public, or in our undergraduate population.”

Starting in 2013, the NSF gave the California Alliance enough funding for about five postdoc fellows from underrepresented groups, but the alliance believed it could find many more. Every year since, it has received about 50 applications from all over the country. By leveraging funds and partnerships with many sources, the Alliance has provided fellowships to 40 postdocs — eight times the number funded by the NSF — during the past six years.

Of those 40, most scholars still are progressing to the professoriate, and 10 are already faculty members. Grace Bulltail, an assistant professor at the University of Wisconsin-Madison
and a member of the Crow tribe, benefited from the California Alliance.
(Photo by Todd Brown)

One is Grace Bulltail, an assistant professor at the University of Wisconsin-Madison’s Nelson Institute for Environmental Studies. She did postdoc work at Stanford University from November 2017 to August 2019 and was one of only two postdocs on campus from a Native American tribal group. She said she benefited from annual retreats for Ph.D. candidates and postdocs in the California Alliance; one was held at Berkeley in 2018.

“It was helpful to meet other scholars in the alliance, particularly postdocs,” said Bulltail, a member of the Crow tribe who grew up in Montana and was the first in her family to receive a four-year college degree. “When you’re in that position, of being the first in your family, and not having any guidance, just reaching the point where you get a Ph.D. is such an accomplishment, but then you have to think, ‘What next?’ Being a postdoc is an odd space, because you’re not a grad student anymore, and you’re not faculty, and things really are uncertain. So, it’s helpful to speak to people in that same space.”

“I didn’t really have the best idea of how to direct my efforts after the Ph.D.,” she added, “ … so, luckily, I learned about the California Alliance, which opens doors to faculty speaking to you and agreeing to be possible mentors, and that’s how I ended up at Stanford.”

The path to professional advancement at top universities, said Patt, can involve “ambiguity and uncertainty — about how to find positions, get selected for positions, get promoted — and it makes continuing down the academic path a more hazardous route for underrepresented minority scholars,” who already may be experiencing stereotype threat and fear of being judged if they ask for the strategic advice that every student needs. California Alliance alumna Marcella Gomez (center) today is an assistant professor in UC Santa Cruz’s Department of Applied Mathematics and Statistics. Here, she is pictured at the 2019 NSF Alliances for Graduate Education and the Professoriate Research Exchange Retreat at Stanford University, where she was a keynote speaker. (Photo by Michael Spencer)

A “blatant” example, Patt said, is that the law requires that jobs be advertised with sufficient time and public notice for people to apply. But postdoc jobs, the stepping stones to academic careers, are not always advertised, she said, are not posted uniformly on job boards and can be managed by “old-boy networks” that may not reliably advance students equitably to the next career step.

The alliance model is based on the working assumption that there are few incentives for universities to act independently to change existing recruitment and hiring processes for postdocs, whose positions are expensive and are only a year or two in duration. Frances Hellman is principal investigator for the Research University Alliance
and dean of Berkeley’s Division of Mathematical and Physical Sciences.
(Photo by Ben Ailes)

“You can’t solve the problem without working together with others in an alliance, such as this one,” said Frances Hellman, principal investigator for the Research University Alliance and dean of Berkeley’s Division of Mathematical and Physical Sciences. “It’s important to incentivize institutions to work together so that resources invested in a postdoc are not seen as a short-term investment in a single research project on their home campuses, but, rather, a long-term investment in the network and the growth, strength and diversification of the field.”

Bulltail, at Wisconsin-Madison for about a year, said she’s discovered “a lot of opportunity” being on the faculty and is participating in research collaborations. In addition to starting up her lab space, she’s planning to do research with tribal communities in Wisconsin. There are 13 American Indian and Alaska Native faculty members on the campus, she added, and while acknowledging the number is small, she added that, “to me, it’s a lot, since every other university (I have attended) has maybe five, at most.”

Of the alliance, said Bulltail, “I think this type of program should exist at more colleges and universities.”

That’s the Research University Alliance’s plan, said Patt. “Once we’ve completely implemented and tested this program,” she said, “we hope it will be a model utilized at other institutions, in other academic fields and with other underrepresented populations.”

This article originally appeared in Berkeley News, October 20, 2020, and is re-posted with permission in the UC IT Blog.