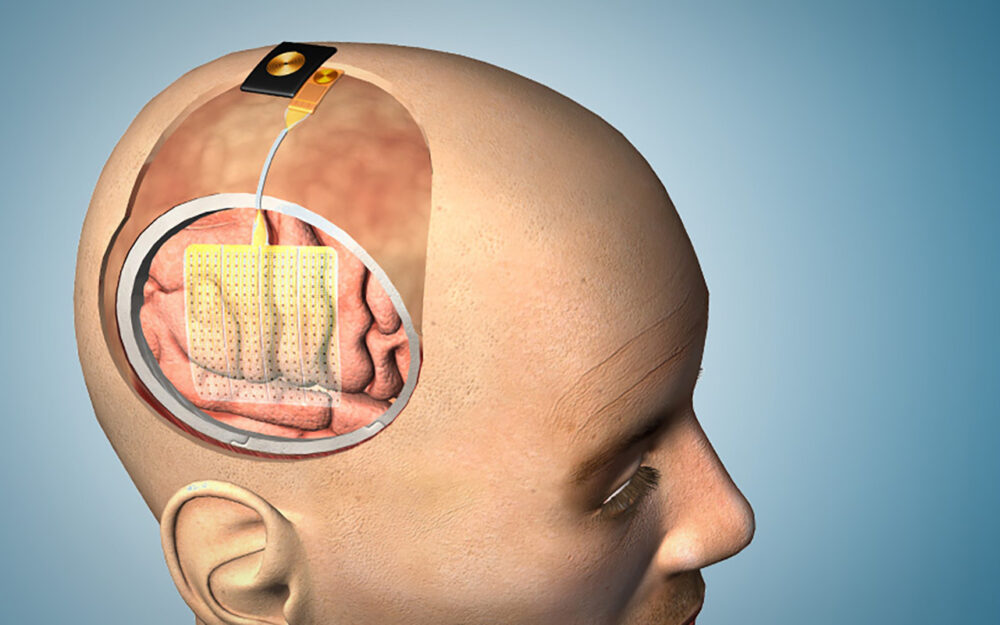 By Daniel Kane. The National Institutes of Health has awarded a $12.25 million grant to the University of California San Diego to develop and enhance brain-sensing and brain-stimulating platform technologies to enable treatment of drug-resistant epilepsy.

The project is led by UC San Diego electrical engineering professor Shadi Dayeh who leads the Integrated Electronics and Biointerfaces Laboratory and brings together expertise from all across UC San Diego, including the Jacobs School of Engineering and Health Sciences. The nation-wide team includes researchers and longtime collaborators of Dayeh at Massachusetts General Hospital led by Dr. Sydney Cash and Oregon Health & Sciences University led by Dr. Ahmed Raslan.

Epilepsy, a group of neurological disorders characterized by repeated seizures, affects more than 3.4 million people in the U.S. according to the Centers for Disease Control and Prevention (CDC); and nearly one-third of these individuals suffer from poor seizure control even after all current medical therapies are pursued. In these situations, clinicians try to identify the abnormal brain tissue that generates the seizures. Surgeons then target this area for surgical removal, or for implantation of an electrical pulse generator that modifies seizure generation. Current technologies to identify the specific regions in the brain that trigger epileptic seizures – called epileptic foci – are imprecise. Improved mapping of these targets will allow better surgical planning – and more generally – will enhance our understanding of brain physiology.

Dayeh’s work in brain-computer interfaces began when he realized his lab’s materials science, device, and integration techniques could allow for sensor grids that offer the tantalizing possibility of providing surgeons with a much clearer picture of the spots in the brain likely initiating the seizures. One of the improvements is an 100-fold increase in the density of sensors embedded within the grids. The new NIH grant will allow the team to expand technical refinement of these higher-density grids and their testing in pigs to the point where they are ready for full-scale clinical trials in people.

“This grant is a significant win for the campus and the region that will have long-lasting positive impacts,” said David Brenner, MD, Vice Chancellor of UC San Diego Health Sciences. “The deep collaborations between neurosurgeons and engineers at UC San Diego will shape the future of medicine for the better.”

“The team is making incredible progress on these large, flexible grids of sensors with high sensor density. This combination of attributes has the potential to launch a new era of neurotechnologies for improved patient outcomes. These advances are only possible when engineers intensively collaborate with clinicians, shoulder to shoulder, in order to understand how the technologies are being used in the clinic and how they can be improved,” said Albert P. Pisano, Dean of the UC San Diego Jacobs School of Engineering.

Higher resolution recording and stimulation for better diagnosis and treatment

The sensor grids the team plans to test will collect information that is 100 times higher resolution than what is collected in the grids already approved for longer-term use in humans. Both classes of sensor grids function using the same basic principle, though there are important differences. The sensors are embedded in a thin flat material that is placed directly on the surface of the brain in order to record brain activity. Each sensor in the grid records the brain waves being produced by the area of the brain near each sensor.

Compared to the grids that have already been approved for longer-term use, the new UC San Diego sensor grids have many more sensors per unit of surface area, and the substrate material is more flexible and better conforms to the brain surface, which helps with signal quality. The advances in both the sensor density and the flexibility are thanks to fundamental materials science advances made in Dayeh’s lab in the Department of Electrical and Computer Engineering at the UC San Diego Jacobs School of Engineering.

“Materials science and advanced technology integrations are leading to big advances in less invasive sensor technologies which rest on the surface of the brain cortex,” said Dayeh. “There is so much potential for materials science to advance clinical medicine, but it needs to be done extremely carefully and the work must engage clinicians and patients as soon as possible. That’s what we’ve been doing, and this grant will allow us to continue this important work.”

The higher density of sensors in the UC San Diego grids means the information about where specific brain activation patterns are originating is more precise. This precision is useful for identifying the spots in the brain that are triggering the seizures. The researchers also believe that the higher resolution information could uncover a much deeper understanding about the origins of epilepsy.

“While we currently have advanced options for patients with epilepsy who do not respond to medication, we are always seeking better options that can improve care,” says Sharona Ben-Haim, MD, neurosurgeon at UC San Diego Health who is a co-investigator on this project. “A more powerful brain sensor may enable neurosurgeons to better identify brain tissue that is causing seizures, and remove this region with greater precision, which may translate to reduced side effects and faster recovery times for patients.”

The team will also be testing related probes that are inserted down into the cortex, rather than resting on the surface. In some cases, information available from these kinds of “depth probes” is necessary to identify the areas triggering seizures.

With the NIH funding, the team will do the work necessary to show that the UC San Diego sensors are capable of functioning as well, if not better than, approved versions of the sensors. In addition, the team hopes to show that the higher density of sensors and stimulators allows the team to collect new kinds of information – “emerging biomarkers” – that could help identify better ways to diagnose and treat drug-resistant epilepsy.

“This grant demonstrates the power of UC San Diego’s robust neuroscience and engineering ecosystems. Improved temporo-spatial resolution will help usher in a new era for the treatment of neurological disease and provide new insights into the music of the brain,” says co-investigator Alexander Khalessi, MD, MBA, chair of the Department of Neurological Surgery at UC San Diego Health and professor of neurological surgery, radiology and neuroscience at UC San Diego School of Medicine. “In addition to better serving our epilepsy patients, we have the opportunity to leverage materials science and computational power to decode this final frontier of nervous system function.”

The grant is designed to fund the efforts necessary to advance the safety and efficacy testing of the UC San Diego grids to the point where the next step is full-scale clinical trials in which the sensor grids are implanted for up to 30 days.

These grids have already been used to safely record signals from the surfaces of human brains, for short periods of time, during surgeries in which a portion of the skull was already going to be temporarily removed.

The one-month window is important because people with drug-resistant epilepsy typically need to be monitored with implanted brain sensors for at least two weeks in order to collect the best data for determining what regions in the brain are triggering the seizures.

“We’ve been fortunate to collaborate with neurosurgeons at UC San Diego, Massachusetts General Hospital, and Oregon Health & Sciences University in order to demonstrate that our high-density grids are safe and effective in humans for short periods of time,” said Dayeh. “This NIH BRAIN Initiative grant will allow us to keep advancing this work to the point that we are ready for clinical trials where the sensor grids are implanted for much longer periods of time in people. I’m thrilled that we’ll have the opportunity to do this work as a community here at UC San Diego, and with our external partners.”

A broader view of brain activity at high resolution

In addition, the UC San Diego grids can be printed in formats that are significantly larger than the grids being developed elsewhere, similar in area coverage to those currently used in the clinic, but with a much higher sensor density. The team is planning to print and test grids that are about six centimeters by six centimeters offering 4,096 sensor channels plus 256 electrical-stimulation channels. This is compared to only 36 sensor channels and 36 electrical-stimulation channels in commercial grade grids – with a similar surface area – that are now being used in the clinic.

With this combination of higher resolution, broader coverage, and longer-use times the researchers hope that future generations of these sensor grids will eventually be useful in applications well beyond drug-resistant epilepsy. The high-resolution information coming from larger regions of the surface of the brain, for example, could be incorporated into future generations of brain-computer interfaces designed to help people with severe paralysis communicate and control prostheses.

The grant also includes funding for engineers at the UC San Diego Jacobs School of Engineering to lead multiple efforts needed to make the device wireless and make it clinically viable. This includes the wireless transfer of data and the energy necessary to power the implanted components of the device, and the software display of the high channel count recording.

In parallel, UC San Diego is planning to build up capacity for good manufacturing practice (GMP) medical device manufacturing on campus. The larger goal is to be able to manufacture sensor grids on campus that are cleared for use in clinical trials.

These efforts position UC San Diego as a national and global leader in neurotechnology for less invasive brain interface technologies.

Funding is contingent on milestones and is made through the NIH’s Brain Research Through Advancing Innovative Neurotechnologies (BRAIN) Initiative, part of a large effort among federal and non-federal partners to use knowledge about how the brain works to develop more effective therapies for neurological disorders.

Dayeh has developed early generation of the sensors with the support of a 2019 NIH Director’s New Innovator Award (1DP2EB029757-01), a 2017 NSF Scalable Nanomanufacturing Award (No. 1728497), and a 2014 NSF CAREER Award (No. 1351980). In addition, Dayeh and colleagues – including his longtime collaborator and mentor Eric Halgren – have received support from the KAVLI Institute for Brain and Mind, the Qualcomm Institute, and together with Dr. Ben-Haim, the three received support from UC San Diego’s Altman Clinical and Translational Research Institute (ACTRI) and Institute of Engineering in Medicine (IEM) for a GEM award, an AIM award from the OIC, and private donors.

According to Dayeh, the team’s technology integration work is at the core of the BRAIN Initiative vision “to discover how dynamic patterns of neural activity are transformed into cognition, emotion, perception, and action in health and disease” (BRAIN 2025 Report)

This article originally appeared in UC San Diego News Center, September 10, 2021, and is re-posted with permission in the UC IT Blog.