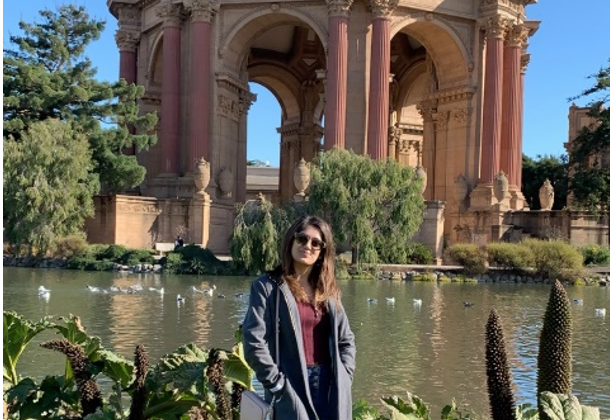 Tell me a bit about yourself.

I started out as a computer science major. Then I took one data science class—and I was exposed to something much vaster than just the technical aspect of things. I ended up taking cognitive science to further my interest about the brain and learn more about artificial intelligence and machine learning.

I’m in a lot of technological clubs on campus. For one, I’m doing data science research with a law professor. We’re trying to figure out how the Supreme Court decides to grant certiorari to some cases. The Supreme Court gets over 8,000 cases but can’t hear them all; so they grant certiorari to approximately 80 a year. We’re looking at the data, trying to figure out if there’s a pattern and why cases are chosen.

Describe the Cisco internship. How did you find out about it?

I was on LinkedIn and just looking through different internship opportunities. It was a software engineering internship. I had four team members, and we worked on creating an analytical dashboard platform for different router triggers for finding and logging bugs. The dashboard collects data on the triggers, and then runs customizable reports. Users can filter the data according to their requirements, and everything dynamically updates.

Did Cisco provide any kind of specific support or training for interns?

Absolutely. So the first three days of the internship were orientation. We learned what resources Cisco has to offer and also, because we were all university students, who we were connected with leaders we could reach out to if we ever had any issue.

And they have this really interesting system where, at the end of each week, we would log what we liked about the work that we did that week, what really helped us in terms of interacting with our managers, and then one thing that we thought could be improved. It was interesting to understand that they were also trying to continuously improve. So my manager would write one for me at the end of the week and I would write one for my manager. It gave us continuous feedback to make sure that we were always going in an upward trajectory.

A really important factor when you go into an internship is meeting people, understanding what they do. Cisco has a policy with interns where you can talk to anyone and just share any experience you’re having. No matter who the person is, and no matter how busy they are, they will take time to explain their role at Cisco, how they’ve contributed to it, and just any other advice.

They also tried to keep it fun because it was in a virtual environment. So every week there were intern meetups. They were always making sure that we were playing games and we had fun Friday events and there were different competitions and a raffle drawing for winners.

Did the internship change how you think about anything?

Absolutely. For starters, it helped me realize that quintessential coding jobs are beyond just the programming aspect. These jobs involve a lot of talking to other people, continuously collecting feedback, and creating dozens of different versions of products until getting to the one that is just right.

I also liked the exposure to learning new things. I felt like I was learning ten new things a day. I think I learned a lot about the actual workplace and the industry, like the terms they use for certain things or just a different perspective on the world.

What I really liked about the internship was how interactive it was. We were encouraged to reach out to different interns working in completely different parts of the world and different fields. So I was talking to people in the Product Management or Supply Chain departments and understanding what their roles were on a day-to-day basis too.

Looking back, what was the biggest benefit from the internship?

Definitely exposure to the industry and to industry professionals. I think about some of the conversations that I had with managers who had been at Cisco for over 20 years, or even recent hires who just graduated college. It was great hearing their experiences and how they’ve integrated their work, their passion, and their knowledge into the company.

I also learned a little bit about how the corporate world works, how to meet a deadline, how to interact with your managers and then also knowing when to ask for help. And that’s a skill that I think you can only learn when you’re actually experiencing something.

How did the internship help you with your goals?

After college, I will definitely try to work in a company where I can be a software engineer. And I’d say after two years I would like to pursue an MBA, so I can sort of dig deep into the business aspect of things too, integrating my two interests.

I think it made me really sure this is the industry I want to be a part of. When I was really, really young, I think I was like six or seven, I used to say I want to be the CEO of a tech company. I didn’t even know what a CEO was and I had no idea what technology was. I just remember, I was watching the news or something, and Bill Gates came on. And I thought, “He’s cool. I want to be like him.” And now I’m in that field!