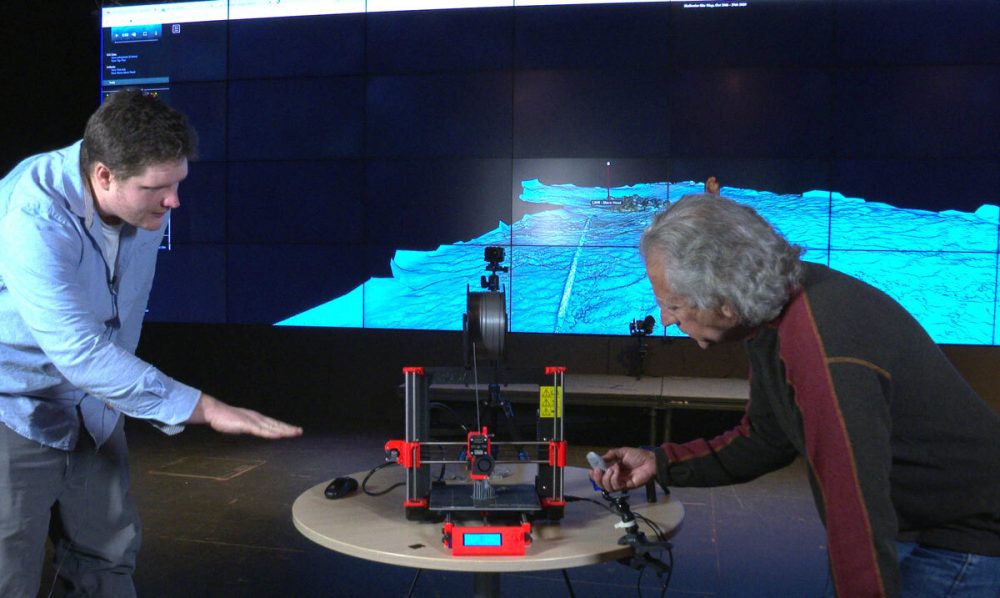 UC IT BloggerJuly 7, 2021All Articles

By Amanda Ricker. Amid the COVID-19 pandemic, many archeological digs were put on hold, as collaborating researchers from various international universities could not travel to conduct fieldwork as a team. In California, the technological possibilities of the Pacific Research Platform not only enabled researchers at the University of California San Diego and their partners at the University of Haifa (UH) in Israel to go ahead with their expedition but also drastically accelerated data analysis times.

UCSD researchers had planned to fly to Israel to work in person with their UH counterparts on the underwater excavation of a late Stone Age Neolithic village located off northern Israel’s Carmel Coast. But quarantine requirements would have turned a three-week trip into a two-month-long commitment filled with idle time. Instead, UH researchers conducted the fieldwork while UCSD researchers helped process and analyze the findings virtually.

UH researchers scuba dived at the underwater site, excavating and collecting artifacts, all while wearing GoPro cameras and live-streaming video of their underwater movements. UCSD researchers received raw data from the divers daily and used the computational resources of the PRP, along with photogrammetry, the process of using images to create 3D models, to recreate the site virtually, print artifacts in 3D, and examine the information, often within mere hours. Due to the 10-hour time difference, one team was able to work while the other team slept.

“While the UC San Diego team could not be physically in the field, the two teams collaborated around the clock,” said Professor Thomas Levy, a director at the Scripps Center for Marine Archaeology at UCSD and head of the Center for Cyber-Archaeology at UCSD’s Qualcomm Institute, the UC San Diego Division of the California Institute for Telecommunications and Information Technology (Calit2). The Israeli team was led by Professor Assaf Yasur-Landau, Director of the Leon Recanati Institute for Maritime Studies, at the University of Haifa.

Archeologists are increasingly using digital technologies to record ancient artifacts and sites for research, conservation, and presentation to the public. UC San Diego is a leader in this field, which is often called “cyber-archaeology.” Professor Levy’s Levantine and Cyber-Archeology Lab develops and deploys new software, hardware, and systems for reconstructing the archeological record through the use of digital technologies for imaging, analysis, and visualization. As co-director of the Scripps Center for Marine Archaeology (SCMA), Levy and the UC San Diego team are bringing the cyber-archaeology workflow underwater. This California-Israel underwater excavation united international talents in archaeology, science diving, scientific visualization, and 3D-modeling and printing, and is sponsored by the Koret Foundation in San Francisco.

Supported by CENIC’s 400-gigabit research network, the UCSD team was able to leverage computational resources from the PRP’s Nautilus cluster by use of a browser-based Virtual Network Computing (noVNC) desktop container, which is capable of operating as a full desktop environment inside a Docker container. The container allowed the team to have access to a shared desktop as well as to leverage multi-Graphics Processing Unit servers for quick processing. The UCSD team deployed Agisoft Metashape software in the container to process billions of data points collected from GoPro camera footage into 3D “point clouds” to create 3D replicas and offloaded the data to the UCSD libraries server for viewing through Potree.

It would not be surprising if the collaborative virtual approach to archaeology lasts well beyond the COVID pandemic with research teams conducting fieldwork complemented by remote teams analyzing finds virtually. This method not only limits travel problems but also reduces or eliminates accommodation and airfare expenses. And, in this new research world, as higher resolution instrumentation is becoming better and cheaper, using photogrammetry is rapidly becoming the norm for many expeditions.

The Future of Big Data Collaboration

The PRP’s cyberinfrastructure opens up many possibilities for remote collaboration on big-data projects among researchers at far-flung universities. The platform supports a broad range of projects that will impact science and technology worldwide, including data-intensive projects on galaxy formation and evolution, telescope surveys, particle physics data analysis, simulations for earthquakes and natural disasters, climate modeling, and virtual reality and ultra high-resolution video development.

The PRP is a partnership of more than 50 institutions, led by researchers at UC San Diego and Berkeley. PRP has support from the National Science Foundation and includes the US Department of Energy’s Energy Science Network (ESnet), as well as scores of research universities in the nation and around the world. The PRP builds on the optical backbone of Pacific Wave, a joint project of CENIC and the Pacific Northwest Gigapop (PNWGP), to create a high-speed, big-data “superhighway” that enables collaboration in a broad range of data-intensive fields. Interest in the PRP has sparked scaling up the project to a full National Research Platform (NRP) and, indeed, a Global Research Platform (GRP). The CCAS and SCMA team hopes to bring their Israeli partner institutions into the PRP.

“We want researchers to imagine doing more — expanding their research goals and imagining greater possibilities. The PRP is a platform to help them achieve more,” said Tom DeFanti, PRP co-principal investigator and research scientist at the Qualcomm Institute.

This article originally appeared in CENIC Blog, February 26, 2021, and is reposted with permission in the UC IT Blog.