Women in Technology: What Do University of California Women Leaders Say? 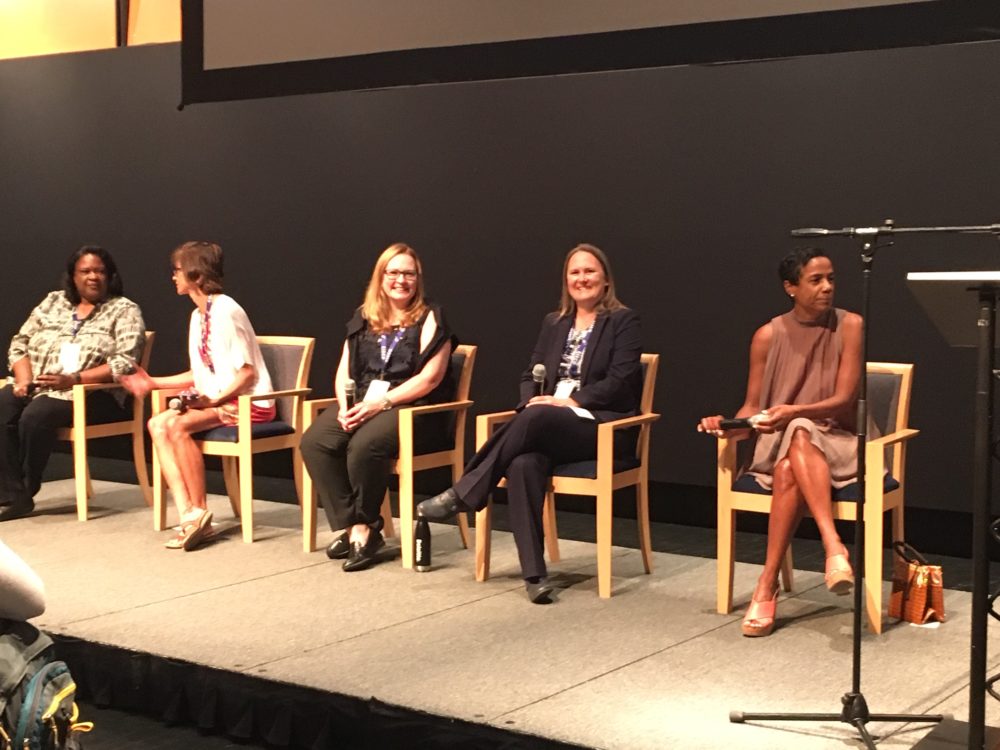 By Julia Chen. Despite their growing numbers, women in technology still face significant barriers in the workplace. According to a 2016 report performed by the National Center for Women in Information Technology (NCWIT), only 25% of the computing workforce was made up of women. Even fewer were women of color, and barely any held leadership positions.

At this year’s UC Computing Services Conference (UCCSC) at UC Davis, over 100 UC IT professionals gathered at the conference’s first Women in Technology Panel to share insight, experiences, and advice for women in technology.

All five women have extensive experience in the technology industry, and have experienced some gender-based discrimination as they have traveled the path to leadership positions. Confronted with challenges ranging from daily micro-aggressions to overt forms of sexual harassment, women working in technology often have to work twice as hard to prove themselves in the workplace.

When asked about unique challenges in higher education technology, Rugg described often finding herself in a double bind: women are stereotyped as educators, while educating is stereotyped as a soft skill. “Women can bring strength to educational technology, but this can be limiting,” said Rugg. “People think we’re not as ‘technical’ as men, so we have to work to be accepted at the table.”

Another question Murali asked was, “What successful strategies have you leveraged within your organizations to gain respect?” May responded with a concise piece of advice: to learn as much as possible. “I studied hard and was constantly asking questions,” she said. “I gained respect by knowing so much.”

“Build a brand as someone who works hard,” added Kirkpatrick. “Find bosses who will brag about you, and colleagues who will give you credit where you deserve it.”

Gianforte said, “Attach yourself to a mentor you admire, but you have to be aware of the consequences.” She explained that she often faced negative responses when displaying the same leadership qualities that her male colleagues and mentors were rewarded for.

When asked how to effectively increase diversity in IT, Washington explained the importance of creating inclusive job descriptions that attract women and people of color, rather than discouraging them from applying. She described participating in a recruitment where references to gender and race were removed from applications before they were sent to the selection committee. By reducing opportunities to negate a candidate based on implicit biases, the organization saw it was hiring significantly higher numbers of women and people of color.

Even after the hiring process, it’s important to keep inclusion in mind. “You need to set up a ‘culture of survival’ when you hire women and people of color,” explained Washington. “The ‘man culture’ of going out for drinks after work with your buddies – that’s a networking opportunity that most women aren’t a part of. And you can lose some really good talent if people feel excluded or uncomfortable.”

The tone of the panel was hopeful and positive. When Murali asked why women should be in technology and what makes it exciting for them, Gianforte said, “Technology, aside from medicine, will bring the biggest impact to the world. If you want to make a change, be in technology.”

The panelists also shared their thoughts about how diversity and inclusion at UC can continue to improve. An overarching message was that “diversity of thought” is essential at any institution. Washington urged the audience not to settle for symbolic support, and to ensure that their organization is making a visible commitment to maintaining diversity in the workplace. “The support system should be there for you, not for the institution,” said Kirkpatrick.

Investing in women is the first step in eliminating workplace discrimination. “If you have less women, there is more harassment,” May explained. “It’s about women being in the room.” The panelists suggested creating more pipelines, such as STEM programs and internships, for young women interested in technology.

If the 2018 WIT panel was any indication, the future is bright for women in technology. A systemwide WIT group is in the works, and the WIT track will develop further at future UC Tech conferences. With strong, intelligent female leaders at the helm, the representation and inclusion of women in tech can only continue to grow.

Julia Chen is a UCLA student intern in IT marketing and communications at the UC Office of the President.