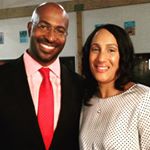 Posted by Ghanya Thomas, ITS executive assistant, UCOP. In the spirit of President Napolitano’s UC Oakland Partnership, Information Technology Services at UCOP provided support for the 2nd Annual David E. Glover Legacy Awards. The David E. Glover Center is an Oakland-based organization that offers technology training and workshops to underserved residents. It also partners with other groups, such as Black Girls Code and the Hidden Genius Project, to prepare Black youth for technology careers.

Nearly 200 people gathered at the Impact Oakland Hub on October 15, 2015, to recognize the contributions of five African-American business and community leaders. Van Jones (pictured left, with Ghanya Thomas), a Yale university-graduate, New York Times best-selling author, and founder and president of the Dream Corps, was the event’s keynote speaker. Based in Oakland, the Dream Corps launched three initiatives (#cut50, #YesWeCode, and Green for All) to empower underrepresented communities to achieve sustainable economies.

Jones pointed out that Facebook, Google, and Yahoo are within 38 minutes from the event’s location, but African Americans and Latinos represent less than 5 percent of their nontechnical job force. Last year, Yahoo disclosed that African Americans comprise only 2 percent of its workforce, with Hispanics at 4 percent. In 2014 Facebook reported only 81 Black employees out of 5,500 U.S. workers.

To counter the lack of diversity, Jones developed the #YesWeCode project, which teaches 100,000 people from low-income communities to write code. Jones noted the overwhelming representation of Blacks in the NBA and Black youths’ strong interest in becoming famous rappers. He said, “there are only 450 positions available in the NBA” and the odds of being the next Jay-Z is “one in a million.” With the growing demand for tech workers, he said, “the opportunity to become a computer programmer and earn $70K a year is far greater.”

Currently, the number of African American students who earn compute science degrees in the United States and Canada is under 4.2 percent; for Hispanic students it is 7.7 percent. Jones believes that by supporting Oakland-based organizations like the David E. Glover Foundation, the city of Oakland can develop a skilled workforce to help close the gap.

Among the Legacy Awards’ honorees this year was Frederick Hutson, recipient of the entrepreneur award, and an inspirational example of the talent and potential in underrepresented populations. Hutson is founder and CIO of Pigeonly, a company that offers low-cost phone services and photo application tools to allow inmates to communicate and share pictures with loved ones.

Hutson’s first entrepreneurial venture was as a youth when he employed kids from the neighborhood in a newspaper business. But later, after an honorable discharge from the U.S. Air Force, he soon landed in prison for trafficking marijuana. The frustration of being transported to multiple correctional facilities and losing contact with his family gave him another business idea—this one, though, was legal. Upon his release, Hutson landed in a halfway house, where he secretly pitched his business idea for inmate services to investors. Today, Pigeonly is a multi-million dollar niche business with over thirty employees.

Sustainable communities, innovative solutions, and profitability – that’s what diversity in IT brings.