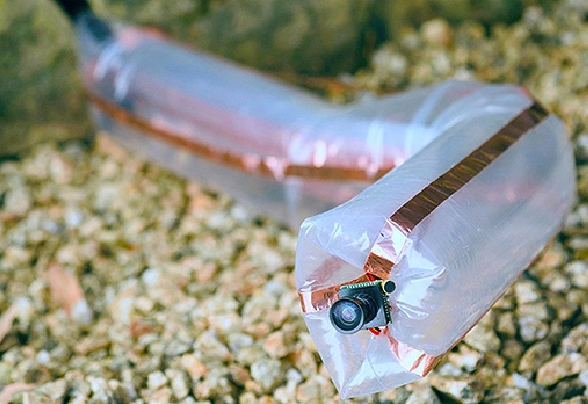 By Sonia Fernandez, Engineering and Public Affairs Writer, UC Santa Barbara. When you think of robots, it’s likely the image that pops into your head is one of a rigid, perhaps humanoid metallic machine with electro-mechanical actuators and calculated movements. Which is all the more reason why, when UC Santa Barbara mechanical engineering assistant professor Elliot Hawkes’ pliable, pneumatic-powered soft robot came along, it was considered so innovative. And it’s now been named one of Science Robotics’ “Ten robotics technologies of the year.”

“We are honored to have our soft robot chosen,” said Hawkes, who developed this technology with colleagues at Stanford University. “There is definitely a bit of luck involved, given all the robots out there, but we are excited nonetheless.”

It’s much more than luck, though. Inspired by systems that would seem unconventional for robotics, such as plants’ roots or growing tips, or developing nervous systems in animals, this robot’s innovation is that it grows to navigate its environment.

“In the cases where nature uses this type of movement to go somewhere, it’s often trying to create a structure which it can then use,” Hawkes said previously about this research. Neurons form conduits that can transport signals between brain and organs, he added. Tip-growing cells in the stalk of a plant can support it against wind and rain, and fungal hyphae can transport nutrients.

The result of Hawkes’ work is a robot that can do what many other robots can’t: squeeze into small spaces, navigate tight angles and exert pressure on objects and materials without destroying them. Using air pressure to drive a worm-like flexible tube that unfurls from its front end, the robot pushes through its space without generating friction, while creating a conduit that could then be used to transport and deliver its payload to its destination.

“It shows some unique abilities for moving through cluttered and constrained environments that were simply not possible with previous robots,” Hawkes said.

This novel and sophisticated form of robot navigation has numerous potential applications, such as in search-and-rescue operations where it could be deployed to travel around and through unstable rubble to find survivors. Or, in less urgent applications, it could be used to route cables, wires and hoses through inaccessible spaces during construction. Currently, the researchers are developing miniature medical versions for use in the human body.

“We hope this can improve diagnostic procedures as well as minimally invasive surgeries,” Hawkes said.

This article originally appeared in The Current, March 8, 2019 and is re-posted with permission in the UC IT Blog.