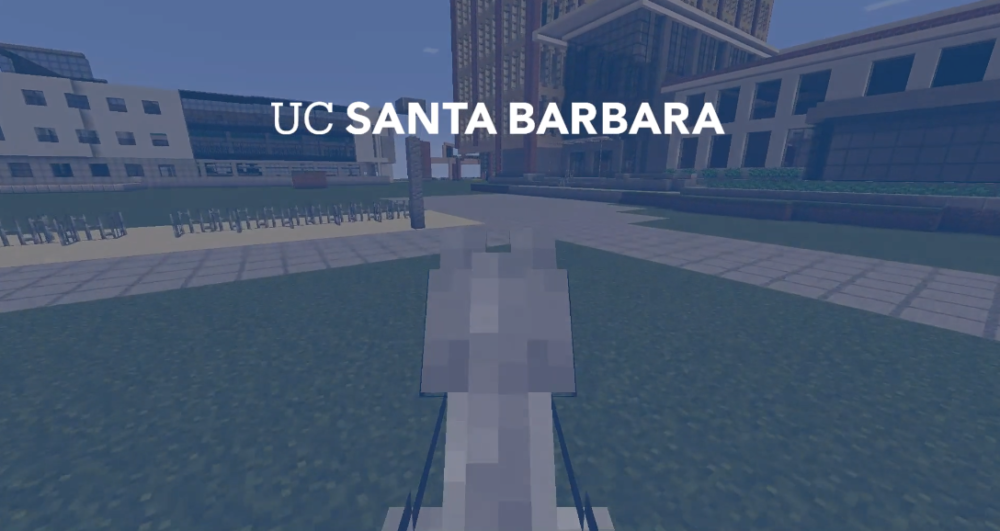 By Harrison Tasoff. For undergraduate Charles Neumann the announcement that spring quarter classes would be delivered via remote instruction was sad news. Like many graduating seniors, he had hoped to spend his final days at UC Santa Barbara enjoying classes and in the company of friends on the picturesque campus.

“I was actually studying in the library at the time with some friends,” recalled Neumann, a fourth-year political science and global studies major, “so I just decided to write a post on Facebook.” His idea: Keep the community together by creating a joint server where fellow Gauchos could enjoy the game Minecraft with each other.

Now Neumann administers a digital version of the sea-side institution, constructed and populated by the students who hold it dear. The virtual campus already includes landmarks like the UCen, Storke Tower, and Campbell Hall at a scale of 1 block to 1 meter.

Walking around the map feels like taking a stroll through campus on a foggy day, with buildings farther afield hidden from view by the game’s limited rendering distance. The pastel-colored sidewalks and red cinderblock buildings impart a familiar feeling to home-bound students, faculty and staff.

“People have been saying that it’s literally as if they are walking on campus because the attention to detail is so amazing,” Neumann remarked.

As the map comes together, you get a sense of which places hold the greatest significance to the students creating it. Central locations, like The Arbor, Storke Plaza and the UCen have received early attention, as have the on-campus residence halls. The community has re-created the iconic foyer of Davidson Library in exquisite detail, and are working on the rest of the massive structure.

However, the server captures more than just the architectural aspects of campus. Players can ride around campus — not on bikes, which aren’t a part of Minecraft, but rather on horses. They can also enjoy Dog Therapy Day on the grass north of the library or talk with the man at the 5¢-advice booth near Girvetz Hall. Students can even stop by for some quality time with Big Boy the cat. You can see the full tour here.

Although Neumann hosts and administers the server, the project has no central management. Anyone can join using the Java edition along with the IP “islavista.mc.gg.” Once there, they can help build the map as long as they use Google Earth to ensure the measurements work out.

The endeavor quickly grew beyond just Neumann’s own cadre of friends. “I have never met, probably, 95 percent of the people who are part of the server community,” Neumann said. And new people join every day — more than 420 people had joined the Facebook group as of late April.

While Neumann intended the server to be a place for friends to hang out, the community is already adapting it to its needs. For instance, he’s heard of prospective students using the map to familiarize themselves with the campus. Neumann hopes to host fun events in the future. “I definitely want to do a graduation ceremony on the server,” he said.

Neumann believes activity will likely remain high the longer students remain off campus. “I think where the server goes really depends on what happens to remote instruction,” he said. If online instruction continues into the fall, he thinks it could help the incoming class of 2024 develop a sense of camaraderie.

Ultimately, the fate of the server rests with the community that has created it. The community’s needs will determine the purpose this virtual space serves and how that will evolve over time.

This article originally appeared in The Current, May 4, 2020,  and is re-posted with permission in the UC IT Blog.