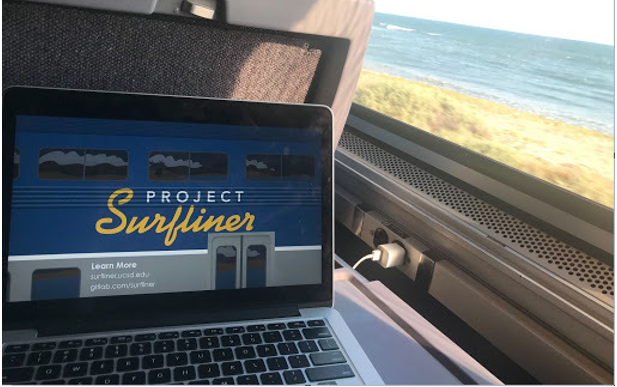 By Jessica Hilt. If you’ve ever perused a display of photographs or manuscripts, or immersed yourself in a historical timeline on the walls of a library, you know that exhibits are an integral part of showcasing a library’s collection, inspiring students, and displaying the work of researchers at the university.

UC Santa Barbara and UC San Diego wanted to bring a unified experience to displaying digital content in the same engaging way. However, both campuses were frustrated that the solutions for this type of content were underdeveloped or hard to implement with a small team.

After a day at the Samvera Connect (open-source community) conference in Salt Lake City, Utah, in 2018, a group of 15 people from different UCs laughed, discussed the day, and ate flaming cheese. There was an idea on the table. What if we tried to build something together?

“At the conference, there were plenty of institutional partnerships, but we were already partners—we were all members of the same UC family,” said Tim Marconi, Starlight project champion at UC San Diego. “Resource sharing is much easier when we collectively share the same boss, so how about we pool our respective resources and work together on a platform that would work for the University of California? Even if other UCs weren’t able to participate, we could build something they could use if they wanted.”

But where to begin? Could that “something” be an exhibits platform? That’s what they set out to do—together.

The open-source software they started with was called Spotlight, a Stanford-developed product for their library collections. The custom version of the product that UC San Diego and UC Santa Barbara built together was called Starlight, and they set it up to handle multiple institutions so it would be easier for other UCs to join.

Although each campus installed the product on their own servers, they worked from a single codebase. This way, features, limitations, and bugs would be shared by both campuses and would be worked on together as one team.

“Having a shared codebase that both institutions were deploying directly from was a new model for us to work in,” said Matt Critchlow, the UCSD technical lead for the project. “While initially we had to work through how to configure it properly, and still allow each institution the flexibility it required, ultimately we’ve found the shared code repository has helped keep us in sync with each other.”

It wasn’t always smooth sailing. Working as a team can be rough in the beginning and is doubly complicated when working remotely. However, the team wanted to capture the good with the bad so that others could learn from their endeavor.

Currently, UC Santa Barbara has migrated 24 public digital exhibits into the Starlight product. UC San Diego has moved many of their special collections digital exhibits off separate platforms and onto Starlight.

The standardization of the platform is evident in the “look and feel” that appears as part of a more cohesive library-branded product. It is not just the visual aesthetic that has been unified. It also means hundreds of hours saved in shared knowledge, experiences, and successes between the campuses. In the end, the results are best showcased as the digital exhibits themselves—rich, easy-to-produce exhibits, without having to use a proprietary system.

“Despite all of the challenges, the impacts of the collaboration have been more than worth it,” said Chrissy Rissmeyer, Starlight product owner at UCSB. “The lessons we learned and the practices we have developed have resulted in lasting positive cultural shifts for our local teams. Because of these impacts, we will be continuing to collaborate on additional digital library applications. I am really excited for us to continue this journey together.”