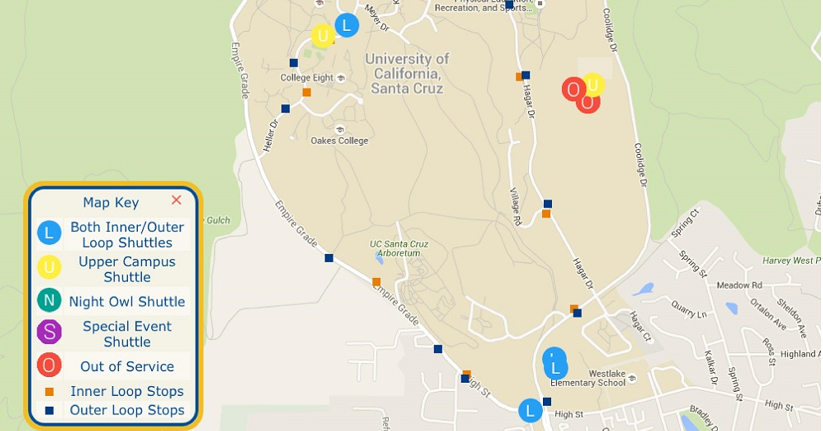 By Alison Spencer. At UC Santa Cruz, students used to wonder if it was worth waiting for the bus. Now, thanks to the Bus Tracking System (BTS) and its mobile application SlugRoute, anyone can see in real time where campus shuttles are. Computer engineering professor Katia Obraczka pitched BTS as an idea for a student senior design project. She saw it as an excellent opportunity for computer engineering students to apply what they had learned throughout their education to a problem that affected them every day.

A team of undergraduates got to work and developed the first version of BTS. The project involved installing nodes inside each UCSC shuttle bus, making each bus part of a mobile network. “The goal was to have the buses report their location automatically and in real time,” said Obraczka.

At the time, no good commercial system was available for bus tracking, making the students’ work especially important. While other UC campuses have since purchased commercial applications, Obraczka sees the advantages of having a student-provided solution. “Our application was very inexpensive to develop because students created it as part of their academic experience,” said Obraczka.

The students found that deploying a homegrown mobile application took a lot of work. “Once we had built and tested one node, we had to replicate and build more than twenty,” Obraczka said. “This was a challenge with our limited resources and students.”

The current version of BTS, BTS 2.0, was developed by Kerry Veenstra, one of Professor Obraczka’s graduate students. For his master’s thesis, Veenstra redesigned BTS hardware to be more compact and robust. Additionally, Veenstra strategically selected five campus buildings to be base stations, capable of reporting bus locations to a central server. This solution allows the school to avoid paying for each bus to communicate through the cellular network.

BTS powers SlugRoute, a web and mobile application that went live in 2016. The project was funded by UCSC’s Transportation and Parking Services. The app proved very popular with the campus community and improved student safety. “Our campus has some remote areas that aren’t well lit at night,” said Obraczka. “We’ve heard the app is especially helpful for people working late.” Created by students for students, SlugRoute has demonstrated the power of technology to improve the campus experience.