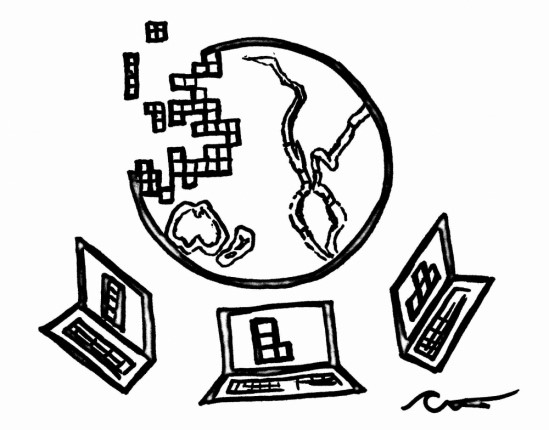 By Julie Cohen. In 2012, scientists at UC Santa Barbara’s National Center for Ecological Analysis and Synthesis (NCEAS) launched the Ocean Health Index (OHI), a scientific framework to measure and track the health of the world’s oceans. Working in partnership with the nonprofit Conservation International, the OHI team measured the combined benefits that oceans sustainably provide for people — from wild-caught and farmed seafood to habitats that protect coastlines. Annual status reports show how and where to improve ocean management.

Now, OHI researchers are transforming the way marine scientists engage with coastal management by leveraging practices and tools used by Silicon Valley software developers to promote teamwork. Employing several free software solutions that upgrade collaborative research, the team has been able to make its entire workflow more transparent and streamlined while enhancing the reproducibility of their data methods. The way in which OHI scientists adopted these “high-tech” practices is described in a new paper in the journal Nature Ecology & Evolution.

“We combine best practices from ocean sciences and data science to help inform the management of coastlines around the world,” says co-author Benjamin Halpern, NCEAS director and OHI chief scientist. “It was humbling to have so carefully documented what we did the first time around and then realize that it wasn’t enough to efficiently repeat our work. We’ve had to completely change the way we do science. Now we do better science, and we also can do it much faster.”

Developing the OHI framework and using it to assess 220 coastal countries was a massive undertaking of data mining and synthesis. The effort involved more than 30 scientists and 100 public datasets. As a way to track changes, the team worked by saving different versions of each file and collaborated about decisions via email. But as the researchers started repeating their methods from year to year to assess global changes in ocean health, problems arose because of the way they had originally worked with data.

“We quickly realized that we needed to transform how we worked to meet the demands of modern science,” says lead author Julia Stewart Lowndes, an OHI project scientist at NCEAS. “We became data scientists, which means, among other things, coding collaboratively the way software developers do.”

Lowndes noted that data science is incredibly powerful for both analyses and communication. “We’re using software tools built specifically for working with data, which includes communicating about what you’re doing,” she explained. “We’ve used these tools to make our methods more repeatable, but what has been game-changing is that we can also use them to build interactive reports and websites so that others can build from our methods directly.”

Sharing data and tools has become essential for global progress on climate, water and biodiversity issues. And this new approach has made OHI methods available to everyone. In fact, 20 groups worldwide, including the governments of Mexico and Indonesia and scientists in Sweden assessing countries on the Baltic Sea, are using OHI science and code for their own coastal management.

“We’ve been able to reimagine the way our science is done, communicated, shared and used,” Lowndes said. “We’re sharing our story because we hope to encourage others in the scientific community to do the same so we can all produce better science in less time.”