By Jeanette E. Warnert. Even as the digital revolution has changed the world, there are thousands of California residents in rural areas that do not have an internet connection adequate for engaging in modern technology.

Youtsey testified at a rural broadband informational hearing in Sacramento on Aug. 28 held by the Assembly Select Committee on Economic Development and Investment in Rural California, chaired by Rep. Anna Caballero (D-Salinas), and the Communications and Conveyance Committee, chaired by Rep. Miguel Santiago (D-Los Angeles.) 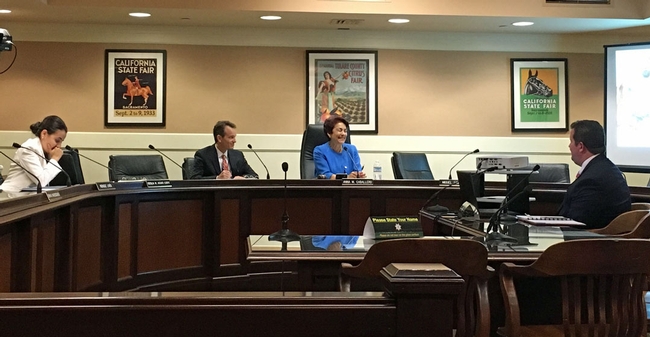 In his testimony, Youtsey characterized the presence of UC ANR in California for the lawmakers.

“We are a network, not a place,” he said. “We have more than 1,500 very applied academics; I call them academics with muddy boots because our job is really to turn science into on-the-ground solutions.”

While it is potentially expensive to bring broadband internet connectivity to every resident of California – from the far reaches of Modoc County in the north to remote desert communities near the Mexican border in the south – those communities’ lack of high-speed internet is also exacting a high medical, social, and educational cost.

“High-speed connectivity is needed in rural communities not just for entertainment,” Youtsey said. “It’s about online education, medical care, banking and businesses. Digital inclusion is an issue of economic justice.”

Youtsey likens the spread of broadband internet to a successful initiative in the 1930s to promote rural electrification in the U.S. The program was managed by the U.S. Rural Electrification Administration, one of the agencies created under the New Deal, President Franklin Roosevelt’s sweeping legislation that helped lift the United States out of the Great Depression.

The government’s role in “internetification” could be an investment in infrastructure, Youtsey said.

“It is very expensive to bring wired internet connectivity to places where it has never been before,” Youtsey said at the hearing.

At one UC ANR location, the UC Sierra Foothills Research and Extension Center, laying a wired connection was cost prohibitive.

“The internet provider had to beam a signal from Marysville, up to the top of the Sutter Buttes, and then beam 26 miles across the valley to our location. That was about a $150,000 one-time set-up cost. That’s just not realistic in many cases,” he said.

Youtsey said UC ANR would like to leverage its remote locations as launch points for public-private partnerships for rural broadband, a plan that dovetails an initiative now being considered by state legislators.

Assembly Member Eduardo Garcia (D-Coachella) has introduced AB 1665, known as the Internet for All Now bill, which aims to ensure social and economic equity for all Californians in the digital age. This bill would approve funding by Dec, 31, 2022, for infrastructure projects that would provide broadband access to no less than 98 percent of California households.

“We support passage of the bill, but we’re not going to stand still,” Youtsey said.

Already, UC ANR is creating partnerships with rural communities to provide shared internet connectivity. One project underway is located at the UC Kearney Agricultural Research and Extension Centernear Parlier, a 15,000-resident community in rural southeast Fresno County that has one of the state’s highest percentages of Latinos. After connecting the center with fast one-gigabit speeds, UC ANR is planning to outfit all 330 acres with outdoor wireless coverage to support research and innovation. The next step will be to pilot a public-private partnership with the local community to work with the center and a vendor to share costs and make affordable broadband upgrades for both the residents in the community and UC researchers.

Another project is located at the UC Lindcove Research and Extension Center at the eastern edge of the San Joaquin Valley near Exeter, an agricultural city of 10,000 near the Sierra Nevada foothills.

“We don’t have this site lit up yet. We’re working hard on beaming a signal from Visalia, 25 miles away,” Youtsey said. “Once we have it here, we’re in the heart of the state’s citrus region. We’re surrounded by commercial citrus farmers who all struggle immensely with getting broadband. We hope to be part of the solution.”

Originally published by UCANR on September 14, 2017. Republished with permission.

Jeanette E. Warnert is a communications specialist at UC Agriculture and Natural Resources.