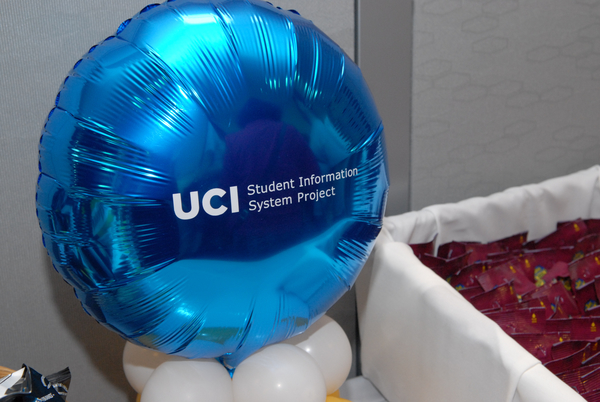 Posted by Allison Tong, SIS Communications Lead, UCI. As many of you know, UCI celebrated its 50th anniversary in 2015. The university has accomplished many milestones over its half-century lifespan, and continues to move forward as one of the top-tier public universities in the country; in fact, UCI was ranked first among U.S. universities under 50 years old—and seventh worldwide—in a report released in 2014 by “Times Higher Education.”

As UCI has continued to evolve and grow, its student administrative systems, developed over the past 40 years using now-outdated technology, have been pushed to the limits of their capabilities.  These systems are essential to campus operations in the areas of Undergraduate and Graduate Admissions; Financial Aid; Registration; Student Financial Services; and Summer Session.

Although these systems have served the campus very well, they have significant limitations that impact their ability to serve campus needs. At the same time, they are becoming increasingly difficult to maintain and are built around disparate student databases that are not well integrated. There are increasing challenges in sustaining them; moving toward a tightly coupled, integrated, vendor-supported system will provide UCI a path for growth and advancing technologies.

A Request for Proposal (RFP) process was initiated in 2013 in collaboration with Deloitte. Approximately 4,000 requirements, along with detailed selection criteria, were developed to represent the needs of the campus. In early 2014, the RFP was formally released where the following software vendors and system implementers (SI) responded: Oracle (PeopleSoft software); Sierra-Cedar (PeopleSoft SI); Ciber (PeopleSoft SI); and Ellucian (Banner software and SI). Ultimately, Ellucian was selected based on the best combination of SIS software and system implementation services. Contracts were finalized later that same year.

In January 2015, the UCI Student Information System Project officially kicked off and has been full speed ahead ever since. During the first half of 2015, SIS Project staff — consisting of UCI employees and Ellucian consultants — engaged in a detailed fit-gap analysis, which is the process of validating current UCI business and technical needs against the Ellucian software solution. After the completion of that phase, knowledge transfers began with the Ellucian software products.

The project is targeting a rolling go-live, with the first module in fall 2017 and the other modules rolling through fall 2018. The successful completion of this project will deliver a central database with integrated, real-time data and introduce a common development environment, which will provide the ability to offer enhanced features, critical data modeling and forecasting capabilities, and a more sustainable platform.

Scope of the SIS Project: