UCLA: Birthplace of the Internet

By Pranay Bhattacharyya. In 1995, as a freshman at UCLA, I learned that UCLA was the birthplace of the Internet. I did not know how much the Internet would make an impact on the world, as it was still something new. My first experiences with the Internet were sending e-mail, opening a webpage at GeoCities, and browsing the Internet with Spry Mosaic. 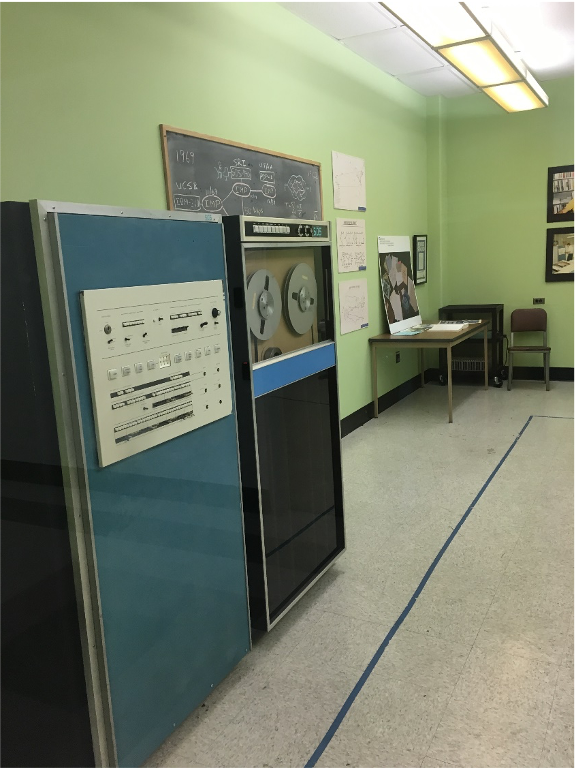 In an office in Boelter Hall, on October 29, 1969, the Internet was born. Professor Leonard Kleinrock at UCLA sent the first message to Stanford. The entire message would have been “LOGIN,” however, the system crashed after only the first two letters were sent. Thus, the first Internet message was “LO.”

This system was called the ARPANET, the precursor to the modern Internet. It was sponsored by the Department of Defense for new technologies. Four universities were connected to the ARPANET: UCLA, Stanford, UC Santa Barbara, and the University of Utah.

Twenty years later, Tim Berners-Lee, a British scientist, would invent the World Wide Web at CERN (European Organization for Nuclear Research). This system was initially called “Mesh” and it would allow information sharing for institutions around the world. The first website has been restored by CERN for viewing.

Lee then went on to create the first web server, web browser, HTML (the language of webpages), the URL (the unique addresses of webpages) and HTTP (the tech that lets web browsers and web servers talk to each other).

The Internet and the World Wide Web 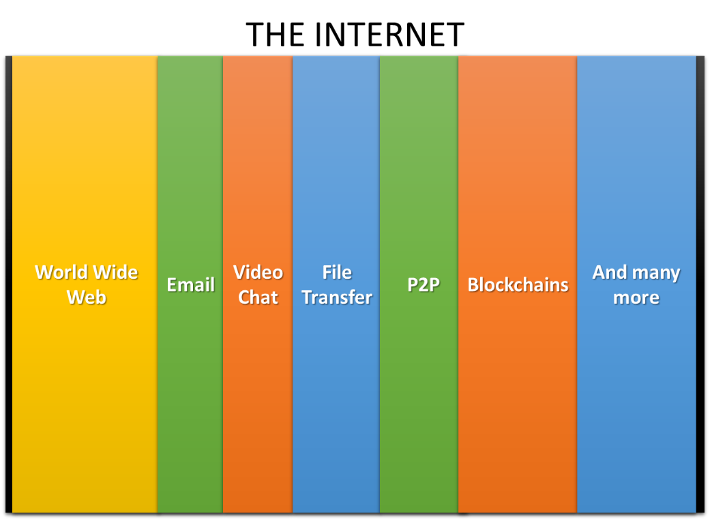 A timeline of the Internet, from the World Wide Web, to email, to video chat, to file transfer, to P2P, to blockchains, and much more

On April 30, 1993, CERN put the software in the public domain. This allows anyone to use the World Wide Web. Without the Internet, the Web could not have been born.

The early web was like the Wild West. Online shopping began to gain steam in 1994. Amazon and eBay opened in 1995. Yahoo was the dominant search engine/directory at the time. Google did not show up until 1998.

Between 1995 to early 2000, there was huge investment in Internet-based companies. Speculators and venture capitalists invested in many companies with a “.com” suffix. Many companies during this time offered their services for free, in the hopes that with enough branding, customers would come back for their paid services.

During this time, I remember many advertisements with Whoopi Goldberg talking about Flooz. According to Flooz, it was an “online gift currency you send by e-mail.” Today we can send gift cards from many of our favorite retailers. But at the time, Flooz was something different, it required merchants to accept the “virtual currency.” When the company went under in 2001, all unspent Flooz became worthless. 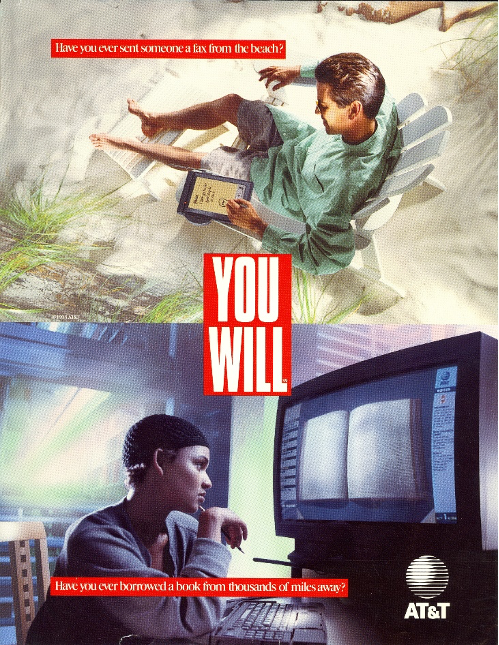 AT&T You Will, advertisement. Fax from the beach, read a book thousands of miles away.

AT&T had a series of advertisements about the Internet and what it could do. In this ad we see a person faxing from the beach, and another reading a book from a library miles away. This was not possible in the 90s, but today we have smart phones that can send PDFs through email, and you can read books from libraries across the world.

The Internet’s birth sparked a technology revolution, with many new technologies being created. The information collected by websites started growing rapidly too, and this eventually led to new ways of thinking about how to analyze this data. And this led to Big Data, which in turn has led to more developments in machine learning, artificial intelligence, and data mining.

Communication with people has become easier. I remember my parents sending letters to our relatives and it would take months to get a reply. If a faster response were needed, they had to send a telegraph, and they would get a reply in a few days. Today we can use WhatsApp, Skype, Messenger, or any other Internet calling service to talk with anyone, anywhere. For many people, land lines are becoming a thing of the past, as wireless phones become more ubiquitous. In many countries there is no infrastructure for land lines; smart phones have helped these people connect to the Internet wirelessly.

The Internet has helped many to stay in touch during the pandemic and shelter-at-home. There have been virtual meetups, birthdays, dinner parties, and more. Many have taken online classes, worked-from-home, and started or shifted their businesses online.

During the lockdown, I gained a new appreciation for how far the Internet has come. From its humble beginnings, we now have a wealth of services that run on the Internet. With the web being open, it has allowed great innovation to happen; anyone can be a part of it, anyone can contribute, anyone can be heard.

Pranay Bhattacharyya is a software engineer, UCLA School of the Arts & Architecture.