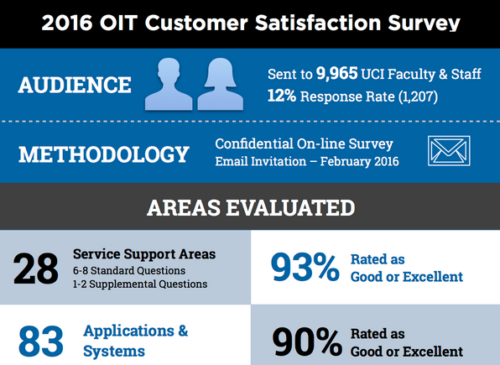 UCSD has been conducting the surveys – often referred to as the Balanced Scorecard – for nearly twenty years. What began as a small effort targeting only the UCSD Business Affairs group, is now implemented campuswide and offered as a service to other UC campuses and higher education institutions.

Angela Song, director of Organizational Performance Assessments, said her team did not purposefully set out to develop an external service offering, but that it came about naturally through the expansion of their campus role and requests by former UCSD employees to use the surveys in their new organizations.

When Kian Colestock left UCSD and joined UCI as Assistant CIO in 2013, he introduced the client services team to Song, suggesting they discuss implementing the survey at UCI. Similarly, when former UCSD Vice Chancellor Steve Relyea took the helm in 2014 as Chief Financial Officer for the California State University (CSU) system, he asked Song to administer the customer service satisfaction survey in the CSU chancellor’s office. And so Song and her team became external service providers.

At UCI, Client Services Director Cheryl Ann Watt admitted to being skeptical at first, but she and her team were quickly won over. “The ready-made survey mechanism, the ability to customize, the years of tried-and-true experience in developing and fine-tuning the survey, and its balanced measurements and metrics met all of our requirements.” As a result of the survey, OIT is implementing everything from faster account set-up for new employees to providing more self-help information to regularly releasing new enhancements to the Kuali Financial System.

The look and feel along with the language in the tool can be customized for each location. Song said, “It feels like your survey, not UCSD’s.” Another advantage for customers, Watt said, is that it “allows users to select just which services they wish to assess, rather than being overwhelmed by a plethora of irrelevant questions.” Now that more higher-ed organizations are using the tool, Song said her team has implemented a benchmarking program so that schools can learn from each other’s findings.

Song said, “My awesome team really cares about making a difference on campuses.” They utilize scientific principles for survey development and continuously seek feedback from customers for improving the survey. “We don’t view our clients as a paying service or ourselves as vendors. We view our clients as colleagues, valued partners. They help make our benchmarking data more valuable.”

Indeed, the sense of collaboration runs strong among her clients, which now include UCR and other CSU campuses, with another higher education system potentially joining the ranks. Recently, staff from UCI, UCR, UCSD, and the CSU Chancellor’s Office gave a talk about the survey process at the California Public Higher Education Conference. They called their presentation, “Collaboration Works,” a testament to the service provided.