With a Hop, a Skip and a Jump, High-Flying Robot Leaps Over Obstacles With Ease 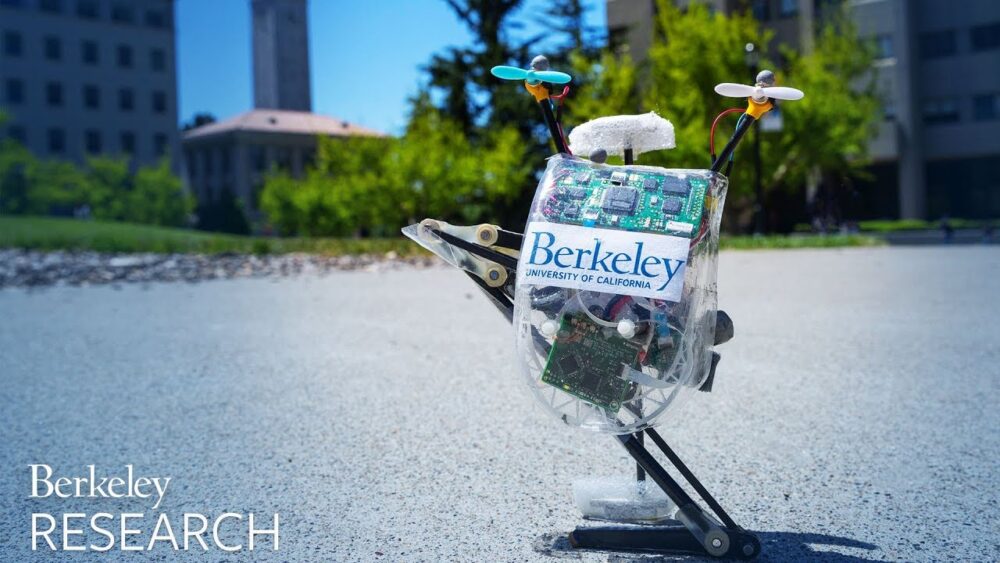 By Kara Manke. Topping out at less than a foot, Salto the robot looks like a Star Wars imperial walker in miniature. But don’t be fooled by its size — this little robot has a mighty spring in its step. Salto can vault over three times its height in a single bound.

Researchers at the University of California, Berkeley, first unveiled Salto’s high-flying capabilities in 2016. Now, they’ve equipped the robot with a slew of new skills, giving it the ability to bounce in place like a pogo stick and jump through obstacle courses like an agility dog. Salto can even take short jaunts around campus, powered by a radio controller.

The researchers hope Salto will propel the development of small, nimble robots that could leap through rubble to aid in search-and-rescue missions. They will describe the robot’s new skills today (Tuesday, May 21) at the 2019 International Conference on Robotics and Automation in Montreal.

“Small robots are really great for a lot of things, like running around in places where larger robots or humans can’t fit. For example, in a disaster scenario, where people might be trapped under rubble, robots might be really useful at finding the people in a way that is not dangerous to rescuers and might even be faster than rescuers could have done unaided,” said UC Berkeley robotics graduate student Justin Yim. “We wanted Salto to not only be small, but also able to jump really high and really quickly so that it could navigate these difficult places.”

Yim works with Ronald Fearing, an electrical engineering and computer sciences professor at UC Berkeley, whose Biomimetic Millisystems Lab explores how the mechanics of animal movement can be applied to create more agile robots.

Fearing’s lab is known for building insect-inspired robots that can safely crawl across tricky surfaces that are too smooth or too rough for a wheeled robot to navigate. In designing Salto, which stands for “saltatorial locomotion on terrain obstacles,” Fearing instead wanted to create a robot that moved from place to place by hopping. 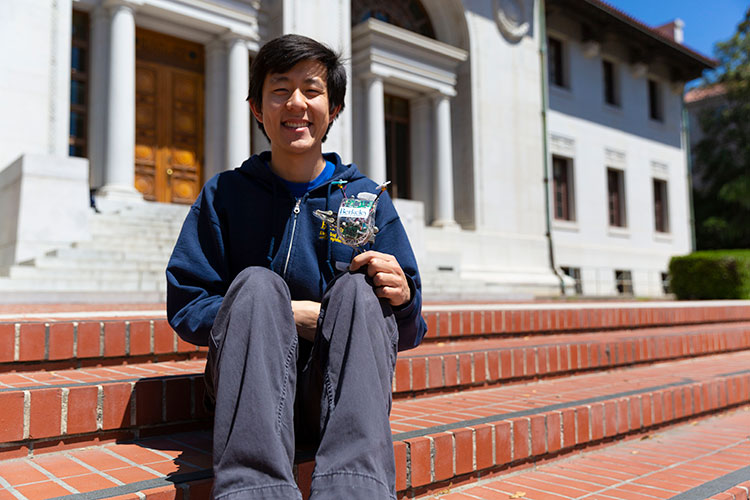 Salto’s single, powerful leg is modeled after those of the galago, or Senegalese bush baby. The small, tree-dwelling primate’s muscles and tendons store energy in a way that gives the spry creature the ability to string together multiple jumps in a matter of seconds. By linking a series of quick jumps, Salto also can navigate complex terrain — like a pile of debris — that might be impossible to cross without jumping or flying.

“Unlike a grasshopper or cricket that winds up and gives one jump, we’re looking at a mechanism where it can jump, jump, jump, jump,” Fearing said. “This allows our robot to jump from location to location, which then gives it the ability to temporarily land on surfaces that we might not be able to perch on.”

Three years ago, Salto’s design team demonstrated how the robot could take a leap and then immediately spring higher by ricocheting off a wall, making it the world’s most vertically agile robot. Since then, Yim has been leading the effort to design sophisticated control systems that let Salto master increasingly complex tasks, like bouncing in place, navigating an obstacle course or following a moving target.

Yim has also equipped Salto with new technology that allows it to “feel” its own body, telling it what angle it is pointing and the bend of its leg. Without these abilities, Salto has been confined to a room in one of Berkeley’s engineering buildings, where motion capture cameras track its exact angle and position and transmit that data back to a computer, which rapidly crunches the numbers to tell Salto how to angle itself for its next leap.

Now that Salto has a sense of itself and its own motion, the robot can make these calculations for itself, allowing Yim to take the robot outside and use a joystick and radio controller to tell it where to go.

“Motion capture is great for getting the robot to jump around in a controlled environment really precisely, and it gives us tons of really great data. The problem is, we can’t take this out and use it anywhere else, because it takes a long time to set up all of these cameras,” Yim said. “We really wanted to be able to take the robot out and go jump around. And to do that, we needed the robot to be able to compute where it is and what it is doing — just with the computer on top of its own body.”

Salto can now go out for walks on the Berkeley campus, where it has successfully maneuvered over sidewalks, brickwork and grass. The mathematical models that make this possible for Salto also could be generalized to control the motion of other kinds of robots, Yim said.

“By understanding the way that these dynamics work for Salto, with its mass and size, then we can extend the same type of understanding to other systems, and we could build other robots that are bigger or smaller or differently shaped or weighted,” Yim said.

In the future, Fearing hopes to continue to explore the possibilities for hopping robots.

“Salto is our first step toward robots that bounce around,” Fearing said. “We could extend Salto to add the ability to, for example, grab onto branches to land and launch from those things. So, Salto starts out with a very simple mechanism. It’s just one leg. It provides a basis for more complicated robots that also could be very highly dynamic and doing a lot of bouncing.”

This research was supported by the Army Research Office Grant No. W911NF-18-1-0038. UC Berkeley undergraduate Eric Wang is also an author on the conference paper.

This article originally appeared in Berkeley News, May 21, 2019 and is re-posted with permission in the UC IT Blog.