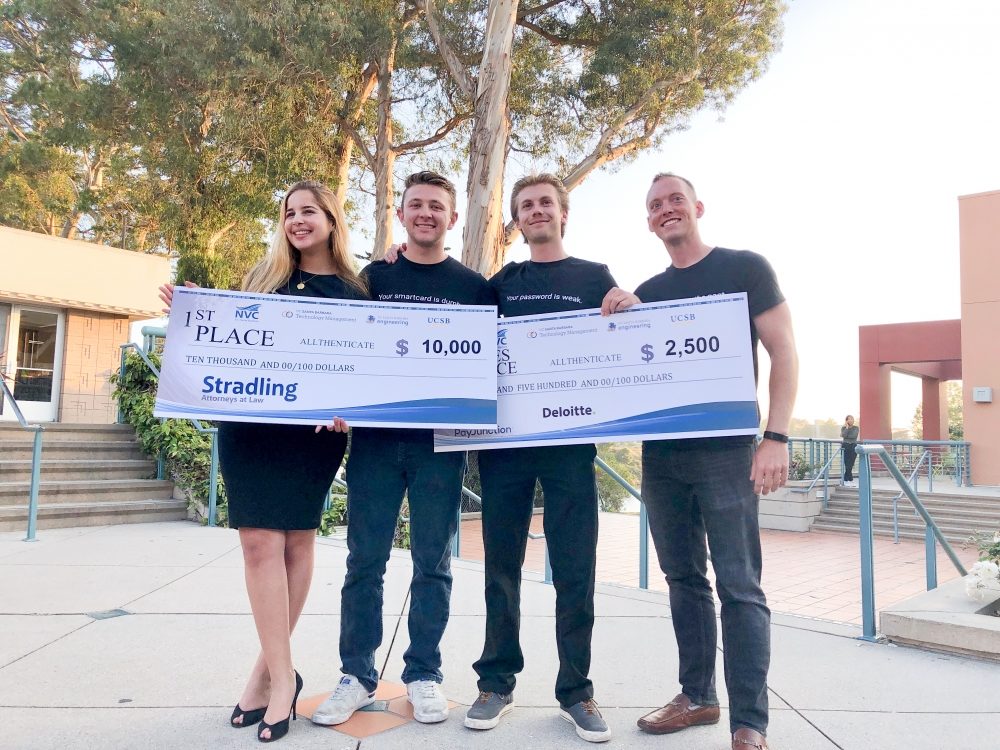 By Sonia Fernandez. Are you ready to ditch your password? The one you’re using for too many of your online accounts? The one you keep forgetting? The one for the email you can’t access even after the provider sent you the clue to prompt your memory?

If so, your lucky day might be right around the corner thanks to UC Santa Barbara students Chad Spensky, Evan Blasband, Rita Mounir and Jake Tear. Their tech startup, Allthenticate, took the $10,000 First Place and $2,500 People’s Choice awards at the 2019 Technology Management Program (TMP) New Venture Competition (NVC) finals Wednesday, May 29. Impressing both the judges and the audience with their smartphone-based single device authentication software, Allthenticate bested five other teams to gain the top spot in the months-long tech business plan competition.

“You were all magnificent today in your presentations,” Dave Adornetto, TMP entrepreneurship director, told the students during the final competition. Indeed, the participating teams turned out polished pitches in front of judges, mentors and a couple hundred of their closest friends at Corwin Pavilion. Among those teams: waste-to-wear textile startups The Hurd Co. and Selva, streamlined gig and job finders Guinea Gig and Enterview and micro-LED developers Microprint. Adornetto reminded the competitors that no matter who walked away with first prize, it rested with the teams themselves to determine whether to pursue their startup plans in the real world.

Now in its 20th year, the New Venture Competition is the culmination of a rigorous eight-month process open to students from all disciplines at UC Santa Barbara. All that’s required is a good tech-based idea and the energy to to bring it to reality. Mentored by individuals experienced in the fast-paced world of tech entrepreneurship, students are given first-hand knowledge and the opportunity to hone their entrepreneurship skills and refine their business plans.

This year, almost half of the NVC participants were female, which, according to Adornetto, speaks to the empowering business education offered by TMP. The program offers a Ph.D. in technology management and a professional master of technology management degree, as well as UC-recognized certificates to current undergraduate and graduate students.

This article originally appeared in The Current, May 30, 2019, and is re-posted with permission in the UC IT Blog.